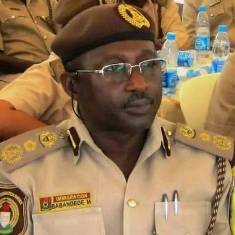 …It is Not True—-NIS Spokesman

…Posted Officers Have Over Stayed At Stations

…Says It Is The Duty Of CG To Say When, Where, How To Deploy

…There Is Nothing Wrong If Officers From North Are Deployed To South, Verse Versa

Trouble is brewing at the Nigeria Immigration Service (NIS) following the over 400 postings made and released by the agency yesterday; May 29, 2017, which most of officers have described as tilted to favour the North.

The online news platform gathered that of the over 400 postings carried out by the Comptroller General of NIS, Mohammed Babandede, more than 200 officers affected at the international wing of the Murtala Muhammed Airport(MMA),Lagos are mostly officers from the South

According to a very dependable NIS source, who spoke to Abelnewsng.com, on the condition of anonymity for fear of being victimised, stated that most of the officers that were affected by the positing, who were at the gateway airport were from the South South, East and South West.

The source explained that NIS posting policy says that any officer that has stayed or worked in a particular place for four years should be transferred, but that the Comptroller General, Mohammed Babandede has jettisoned this policy instead transferred those from the South South, East, and South West of Nigeria, who have not spent up to four years at the airport leaving officers from the North, who have spend up to eight years at the airport.

The source further learnt that the only officers from the North, who were transferred from the airport, were those who on their own requested for posting.

“We have officers from the South East, South West and South South, who have not spent up 10 months, why were they posted out” the source asked.

It was further gathered from the source that the Comptroller General went ahead to deploy officers despite the fact that the Minister of Interior, Lt. General Abdulrahman Dambazau (rtd.) had directed that the posting should be put on hold due to paucity of funds to take care of officers that would be affected.

The postings so far , the source added does not have human face as it was characterised with ethnicism, favouritism and was done to favour officers from the North .

The source also cited cases such as that of Mr V. C Duru and Mr Eluwa both retired Deputy Comptroller of Immigration, whose sons were posted to the zones because their fathers were former Immigration officer, while those officers ,while other officers were transferred as far as Sokoto, Kebbi and other far North.

“We have some officers from the North who have spent more than eight years at Lagos Airport. If the Comptroller had followed the Nigeria Immigration posting policy, they will be the first officer to be transferred, but they were not transferred because they are from the North. Some officers whose fathers were DCI before they retired were just transferred from the Lagos Airport to the Zone. Is that not favouritism?. We who don’t have god fathers were posted to the far North without anything like allowance, accommodation; even we have not over stayed .How does the Comptroller General want junior officers whose salaries are not up to N70,000 to cope. The Federal Government should intervene” the source pleaded.

To further worsen the situation, the source added that the affected officers have been ordered via a circular to report to their new postings latest by May 1`0,2017 and that a compliance report should be sent to the headquarters by the receiving station on or before May 17, May,2017,failing of the officer to report , the source added will amount to declaring the officer AWOL.

The source, who angry with the management style of Babandede , also told Abelnewsng.com that the Comptroller General has also sent a circular that all officers should report to Abuja to do their Identity Cards, a situation the source said was not necessary.

The source queried why officer should go to Abuja to do their ID when it can be done in their respective zones, adding that this has been the practice, alleging that the comptroller and his cohorts are only looking for a way to embezzle government funds

The source further told the online medium that the forms for the IDs that were earlier filled in Lagos were cancelled by the CG, after which he ordered every officer to come to Abuja obtain their IDs

But in a swift reaction, the Public Relations Officer, NIS, Mr James Sunday confirmed the postings but refuted the allegation that the postings were lopsided and was done to favour a section of the country.

He stated that the officers that are complaining are economical with the truth.

He told Abelnewsng.com in a telephone interview that in any organisation it is the head that decides when, where and how to carry out postings, adding that what the present head of the agency has done was not new.

The NIS spokesman added that those complaining are those that have over stayed in their respective places of work, adding that there was nothing wrong if officers from the North are posted to the South and that officers South or East are posted to the North

He continued, “Most of those affected spent up to 10 -15 years in one location, thereby making themselves mini –god. Let me say that the posting mostly affected those, who have stayed too long at airports and seaports.

James contended that when officers stay too long in a particular station, there is every tendency that these officers would take part in clandestine activities that could bring the image of the service to disrepute, adding that these affected officers, who don’t want to leave, are the ones complaining.

The NIS image make disclosed that some of these officers that were deployed to other states of the federation have stayed too long at the four major airports and seaports.

To buttress his point, he told Abelnewsng.com that he has served in 14 states of the federation and that he did not stay more than a year in any of the states

He added that between 2014 till date, he had served in Kebbi, Gombe and now in Abuja, but that he did not complain.

“Is it because I don’t have godfather “he asked

Speaking further, he said, “Nigeria Immigration Service is not a local government appointment but a federal institution .The day these officers were enlisted they swore to abide by the organisation’s rules. Why are they now complaining because they were re-deployed to another state” he asked.

On the allegation that affected officer are not paid allowance for movement, the spokesman said that it is not true, adding that NIS pay their officers 28 days allowance after they must have moved to where they were deployed to.