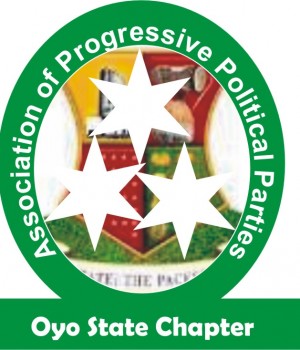 The Oyo State Chapter of the Association of Progressive Political Parties (APPPS) has passed vote of no confidence on the Waheed Oyewole led IPAC in Oyo State.

In the communique the group stated that its attention has been drawn to the unwarranted attack launched against it by Oyo IPAC leadership that its recently released statement about quitting the body was fake and that APPPS is not authentic members of IPAC in the state from the inception of IPAC.

Leading the assault, Oyewole said, “We believe that such news are carried by jobless, clueless and demented beggars, who are possibly seeking cheap popularity where there are none!”

Responding, Oyo State APPPS said, “We at the Oyo APPPS consider these statements (though poorly written) rendered by one Waheed Oyewole to be an unnecessary display of arrogance, which is most unfortunate.”

Speaking, the State Public Relations Officer, APPPS, Mr Tolulope Adedoyin in an interview said, “APA, PDC and BNPP are all registered political parties in the country and we are recognised by the Oyo State branch of the National Independent Electoral Commission (INEC) as state chairmen of our respective political parties. African People Alliance Party (APA) my party came third in the last Presidential election; please visit INEC Website for full fact, APA even got their highest votes in my state. My party’s National Secretary in person of Alh. Sifawa Samaila is the current National Treasurer of IPAC.”

He continued, “How come Waheed is not fully aware of this? How come my party is not a member of IPAC as he claimed? In IPAC it is mandatory for all the political parties to join because IPAC is the only avenue of communicating with INEC. The problem of Waheed Oyewole is that he has not read the IPAC Code of Conduct before rendering his statement or better still we shall translate it to Yoruba language if the English it was written is very difficult for him to comprehend. And for his information APA has never romanced the incumbent Governor Abiola Ajimobi instead we worked against him in the last general elections by adopting Senator Rasheed Adewolu Ladoja of the Accord Party.”

He stated that it was published in the Nigerian Newspapers, as the body had directed its members to vote for him,calling on them to confirm from the present State Secretary of the Accord Party for full details.

To further buttress his point, he added that Oyo APA entourage was in Adewolu Ladoja’s house a day before the last governorship election.

Speaking on the issue, State Chairman of Oyo State APPPS, Mr David Akinola of PDC, said, “Waheed Oyewole should be shameful of himself for uttering such statement. He should know that all registered political parties in the country are automatic members of IPAC. The state branches are free to quit if they want depending on the conduct of such state chapter. We said it in our statement that we don’t know what they (Oyewole led IPAC) are doing; they don’t invite us to meetings that is our grudge with them. We heard a lot about how they used our party names to dupe political candidates and political parties in the last general elections in Oyo State. We heard all they did in the name of Oyo IPAC. The whole of Oyo State are fully aware of all their misdeeds and our opting out of IPAC in Oyo State.”

On his part, Oyo APPPS Secretary, Mr. Olaitan Fadunni, who is also the State Chairman of BNPP said, “Oyewole has turned Oyo IPAC to a beggars association. Governor Abiola Ajimobi of Oyo State heard how they collected money from all the major candidates of different opposition political parties in the last governorship election, they even went to him for same and he disgraced them. That is how the Governor started disassociating himself from them. Oyewole never filled any candidate in the last election for his party and he was made IPAC Chairman, what a shame! And I’m fully sure that SDP, Labour, PDP and Accord Party would never be part of their fake meeting they claimed they had for they themselves know how irrelevant, fake and irresponsible Oyewole turned IPAC Oyo into. We challenged Oyewole to publish the names and signatures of those parties’ representatives that attended his illegal meeting. Since inauguration they have never released any press statement whether to commend or against the current government. We urge Oyo State Government to proscribe Oyo IPAC as an occult group and illegal association in the state”.

Meanwhile, the APPPS in the State has hailed  the National Chairman of IPAC, Alhaji Muhammad Nalado, for his efforts in transforming IPAC and promoting peace and unity among political parties in the country.