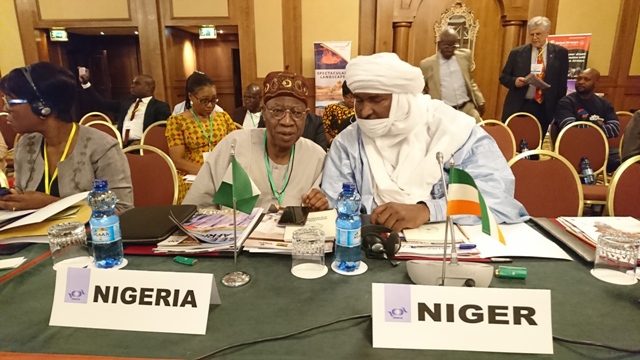 * Minister of Information and Culture Lai Mohammed (left) with his counterpart from Niger at the 59th edition of the United Nations World Tourism Organization (UNWTO) in Addis Ababa, Ethiopia, on Wednesday.

Nigeria on today won the right to host the 2018, 61st meeting of African Ministers in charge of Tourism, tagged the UN World Tourism Organisation (WTO) Commission for Africa (CAF).

An online statement issued by the Special Assistant to Hon Minister of Information and Culture, Segun Adeyemi, stated that Nigeria won the hosting right by acclamation following the presentation of a five-minute video, entitled ”Simply Nigeria”, to delegates at the ongoing 59th edition of the UNWTO CAF Meeting in Addis Ababa, Ethiopia, by the Minister of Information and Culture, Alhaji Lai Mohammed.

The statement added that the compelling video, which highlighted Nigeria’s rich cultural heritage and tourism destinations, was greeted by a prolonged applause.

Responding, the Chairman of the UNWTO Commission for Africa and Zimbabwean Minister of Tourism and Hospitality Industry, Dr Walter Nzembi, said, ”Procedurally, when a member state offers its destination for the host of the next CAF, we all put that request to a test, do I take the applause of the Minister’s presentation to mean your approval of Nigeria as next destination call?”

The question, the statement said was greeted by a more resounding applause, confirming Nigeria as the host of the 2018 meeting.

Making a case for Nigeria’s bid, which was launched at the 58th edition of the UNWTO CAF Meeting in Abidjan, Cote d’Ivoire, in 2015, the Minister said it presents an opportunity for the country of almost 200 million people ”to showcase our rich cultural heritage and to promote Nigeria as a leisure and business destination”.

He described Nigeria as a ”fascinating country” which previously hosted the UNWTO CAF Meeting in 2003, 2008 and 2012, in addition to hosting the Second World Festival of Black and African Festival of Arts and Culture in 1977.

Alhaji Mohammed said Nigeria is a country of peaceful and hospitable people and that the 2018 UNWTO CAF Meeting will be a practical demonstration of the government’s commitment to developing the tourism sector as an alternative source of revenue.

Earlier in the day, he told the delegates that the Nigerian government has defeated the Boko Haram insurgency, noting that occasional attacks on soft targets by the insurgents, who are now on the run do not amount to a resurgence of the group.