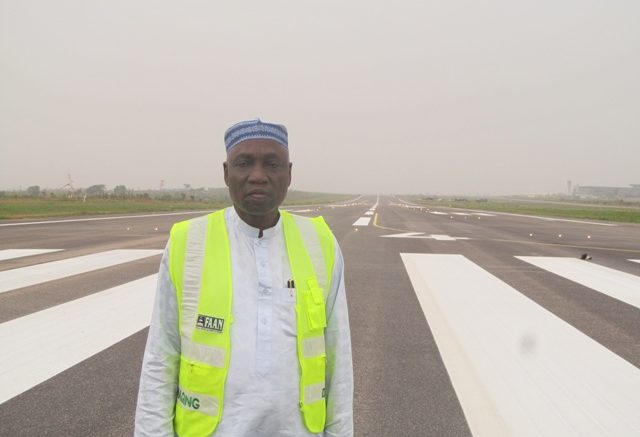 As air travellers and Nigerians anxiously await the commissioning of the much talk about Nnamdi Azikiwe International Airport (NAIA) Abuja runway on April 19, 2017, the Managing Director of Federal Airports Authority of Nigeria (FAAN) Engr. Saleh Dunoma has stated that work on the runway would be 100 per cent completed tomorrow; April 17; two days before the reopening date of the runway for air traffic.

He spoke in an interview in Abuja .

He further stated that on completing the work tomorrow, NCAA would use the remaining two days to to inspect and certify the work that FAAN has done ,after which the airport would re-opened for flight operations.

According to him, “We will be ready by Monday the April 17 but we are leaving the remaining two days for Nigerian Civil Aviation Authority (NCAA),  because they have to certify the airport that what we have done is in accordance with their standards. If they do that, we will bring in the traffic. But if they do not, we have the opportunity of making corrections with the two days we have saved”.

Speaking on the re-opening of the runway on April 19, Dunoma said, “No doubt about that, we will open it as scheduled. Just as I have said, we have been working with NCAA throughout the period, they have been making corrections. But for formality, we need to check and make sure that all the necessary corrections meet the requirement of the civil aviation authority.”

He posited that all the critical items of work are 100 per cent except may be two items, which of course is the markings and the cleaning, adding that other critical item which is not works but the inspection by the NCAA who will come and certify that the repairs that had been carried out is satisfactory and give FAAN the go ahead to bring in traffic to Abuja. Dunoma disclosed that asphalt work has been completed, markings have reached almost 70 per cent and that the Airfield Lighting(AFL) system has also reached 80 per cent

In his words, “There is additional work which has nothing to do with this repair but we are using the opportunity of the closure of the airport to do. This has to do with the APEX (Airport Excellence in Safety) relate items.  We are now leveling all the airfield lightings’ locations, all the installations and flash with the ground surface. In case of any skidding, there will not be concrete projection above the ground surface.”

On the calibration of Navigational Aids, the managing director said “We have not tampered with the Navaids. We just worked on the runway. What we tampered with is the airfield lightings and the airfield lightings are being returned to the same position. The runway does not need calibration. All we need to check is to make sure there is 100 per cent illumination. Calibration is done periodically. When the time comes for calibration, the appropriate authority will calibrate the Instrument Landing System (ILS).”

Fielding question on when NCAA will carry out inspection and certify the runway, Dunoma said, “We have written to them and they will come by 10 a.m. today; April 16, 2017 to do the preliminary inspection. If there is any observation as a result of the inspection, we will now make sure we carry out corrections.

Speaking on the terminal building, he said, “We are improving on all the services there and repairing all the items that are bad. It will be ready by Monday, April 17,2017. Most of the items there have been completed; we are just trying to clean up.”

Be the first to comment on "Abuja Airport Runway To Be 100% Completed Tomorrow, As NCAA Inspects, Certifies Facility"