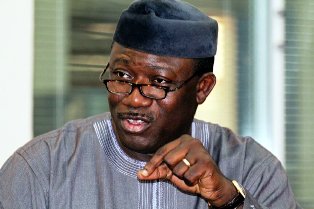 The Federal Government through Minister of Mines and Steel Development, Dr Kayode Fayemi has stated it would not ban foreigners from exploring and investing mineral resources in the country but would make it extremely difficult for them to take raw mineral resources out of the country.

This is just as he also stated that 80 per cent of the companies carrying out sand dredging in Lagos State don’t pay royalty.

The Minister stated this categorically today at a Town Hall Meeting with Mining and Steel stakeholders at Oriental Hotel, Victoria Island, Lagos.

Fayemi, who while addressing stakeholders who turned up for the meeting massively, stated the Federal Government would take lightly any attempt by anybody to take out from the country her mineral resources in their raw forms, adding that the move would not be in the interest of Nigeria.

He told the stakeholders, who filled the venue of the gathering to capacity that the Federal Government in the same vein would not ban foreigners from exploring or investing in mineral resources in the country as banning them would amount to chasing away the much needed investors.

On Ajaokuta Steel Complex, Fayemi disclosed that all the lacunas that were hampering the planned resuscitation of the facility has been resolved by the ministry

Recalled that one of the lacunas is the signing of a renegotiated concession agreement with Global Steel Holdings Limited for the Nigerian Iron Ore Mining Company (NIOMCO), Itakpe.

What the new deal means is that the Ajaokuta Steel Complex has now be given to the Federal Government, thereby freeing the steel complex from all contractual hurdles, which had made it impossible to complete and moribund for years.

Recalled that the new deal came after four years of mediation.

Speaking on what prompted the Town Hall Meeting, the Minister stated that the essence is, “to try and get a better understanding beyond the paper work we see”, adding that road map for the sector was approved by the Federal Executive Council (FEC) was approved and that the highlight is that “we must strengthen the relationship between host communities where the mineral resources are located and those operators.”

He said that the law did not put mineral resources on the exclusive list but that it also gives the power to regulate the resources to the Federal Government, stressing that as a Federal Minister he has a duty to protect them wherever they are found.

Fayemi, however pointed out that there is a lacuna in the law, as the same constitution also empowers state governments to be in charge of the land, where the resources are found.

The same law, he said also empowers the Nigeria Inland Water Ways(NIWA), another Federal Government agency in the Ministry of Transportation to grant permit and issue licenses for sand dredging, adding that the Federal Government is concerned about how to create a synergy among the different authorities, as it relates to dredging sand and at the same time put in place measures that would bring about a win-win situation.

He stated that he had received several petitions from stakeholders on the multiple charges imposed on them by Lagos State Ministry of who collects N500,000 per mineral titled holder, NIWA and Ministry of Mines and Steel Development.

Also speaking , the Area Manager, Lagos Office, NIWA; Engr. Muazu Sambo, commended the minister for the stakeholders meeting, adding that the forum gave stakeholders  the opportunity to enumerate their challenges as it concerns sand dredging and steel.

He reiterated that in line with the law establishing NIWA, the entity has the right to issue licences to sand dredgers, adding that what NIWA collects from those exploring mineral resources in the water ways is for access.

NIWA, Sambo said has the right to charge for access, adding that what the Ministry of Mines and Steel Development collect is royalty, while Lagos charge for consent and NIWA access.

On his part, the Lagos state Commissioner for Energy and Mineral Resources Olawale Oluwo, stated that contrary to insinuations in some quarters, the state does not licence miners but only collect charges before given them letter of consent.

He denied accusing miners of causing environmental degradation, adding that whatever degradation that must have occurred in particular place should be blamed on the regulator.

According to him,”I have not accused any set of miners of degradation. If there is any degradation, it is the regulator that allowed it to happen.”

He assured that the state government would work with the Federal Ministry of Mines and Steel Development, to ensure that the environment was degraded.

But, he was quick to add that before any sand dredger access to the land he must get a letter of consent.

Stakeholders especially dredgers appealed to the Minister to streamline the various charges, in order not strangulate or regulate them into extinction.

They also appeal to the Minister not give licences to several dredgers to operate at the same site, adding this can make the area degrade faster than expected.