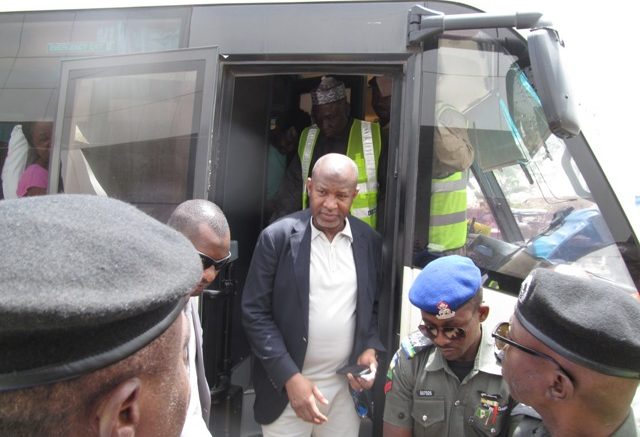 " Hon. Minister of State (Aviation) Sen. Hadi Sirika alighting from one of the busses provided after addressing passengers at Kaduna International Airport

The Federal Government of Nigeria through the Ministry of Transport has conveyed the total 1,890 air passengers by road on the first four days of the closure of the Nnamdi Azikiwe Airport runway to and from Kaduna International Airport.

According to statistics made available by the office of the Minister of State, Aviation, 28 passengers were transported on the first day on the arrival of Ethiopian Airlines’ aircraft, 589, 695 and 578 on the second, third and the fourth day respectively, when the domestic flight operations commenced.

From Nnamdi Azikiwe International Airport (NAIA), Abuja to Kaduna Airport, a total number of 458 passengers were transported, while the return leg was 1,426.

According to the Minister of State, Aviation, Senator Hadi Sirika, “The figure is expected to increase this new week due to rising awareness among passengers.”

The Minister also implored passengers to take advantage of the provision and to also arrive early at the Abuja Airport in order not to miss their flights in Kaduna.

“The passengers need to get to Abuja Airport four hours earlier than their scheduled flight, so the busses will bring them within Two or Two and half hours to be able to process their boarding at Kaduna Airport within an hour”.

According to a passenger on board of one of the busses provided, “the government has saved me nothing less than N10, 000 that I would have used to charter a hired taxi from Kaduna International Airport If I want to go to Abuja on my own.”

Be the first to comment on "Abuja Airport Closure: FG Conveys 1,890 Passengers By Road First 4 Days"