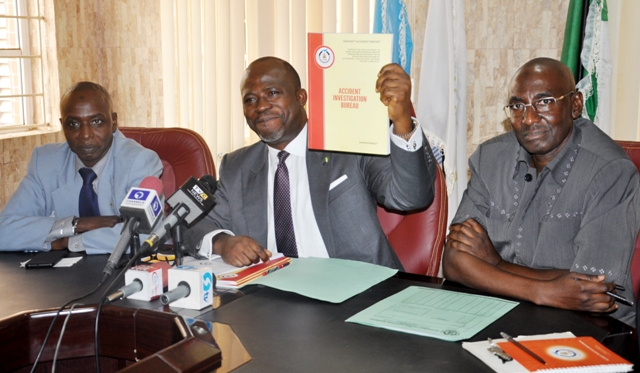 The Accident Investigation Bureau (AIB) has revealed that less than N16 million was budgeted for accidents and serious incidents investigation in the yet to be approved 2017 budget.

This figure experts say may be slashed further, when the two chambers; the Senate and the House of Representatives starts working on this year’s budget.

The Commissioner of AIB, Engr. Akin Olateru made this known today while releasing the accidents, incident and serious incident reports of four airlines: Dana, OAS Helicopters, Bristow Helicopter and the Presidential Implementation Committee On Maritime Safety and Security (PICOMSS) that happened between 2011 2012 and 2013.

He stated that he had discussions with the Minister for State, Aviation, Senator Hadi Sirika on the issue, commending Sirika for the support he has given to the Bureau so far.

Olateru stated that in the event of an accident, the engines would be taken to the manufacturer to tear it down, adding that this cost huge money and that it is paid in dollars.

He lamented that of all the agencies in the transport industry, AIB is the only agency that does not generate revenue, adding that the Nigerian Civil Aviation Authority (NCAA), the Nigerian Airspace Management Agency(NAMA) and Nigerian Meteorological Agency(NIMET) generate revenue.

The accidents and incidents investigation body, he added needs money for the kind of job it does, saying that as a result of  the paucity of funds AIB personnel that were employed in 2012 have not gone on training.

Olateru disclosed that it takes about £15,000 (about N4.7 million) to train one AIB staff, adding that lack of funds has hindered capacity development in the agency.

The AIB  Commissioner, who commended the Federal Government for its support to the agency, urged the minister to use his good office to create a special fund for AIB to ensure it carries out its statutory duty in line with International Civil Aviation Organisation (ICAO) Annex 13.

He added that the agency does not issue invoice fir what it does unlike other agencies in the sector.

Be the first to comment on "Only N16M Was Budgeted For Accidents Investigation In 2017 Budget—-Olateru, AIB Boss"