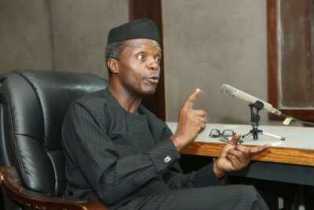 Barely five days to the closure of the only runway at Nnamdi Azikwe Airport (NAA), Abuja for a major rehabilitation work, the Acting President, Prof. Yemi Osinbajo, has ordered the contractor handling the renovation work at Kaduna Airport to speed up work to beat the March 7, 2017 deadline.

He said while speaking to journalists shortly after a tour of the alternate airport to see things himself on Friday in view of the fact that Abuja Airport will be closed to traffic beginning from March8.2017.

On the state of preparedness of the Airport having seen the facilities first hand, the Acting President said,  “Basically, what we are trying to look at the state of readiness and considering the fact that this is really a local airport, a lot of work need to be done to get to the kind of standard that is required.”

He continued, “Work has made considerable progress, but there is still quite a few things to be done but some of them will be completed this weekend, the ceiling and air conditioning and other facilities. But we think that it may not be in a complete state readiness by Wednesday but I expect that within the short period they have, it should have been a very beautiful and comfortable work.”

Speaking on the assurance to foreign airlines some of who have said they would not operate flight to Kaduna Airport, the Acting President said that it was not all the foreign airlines that have declined to fly to the alternate airport, adding that he had met some of the international carriers who are willing to operate to Kaduna.

“Well, one thing that is very clear is that it is not all foreign airlines that are declining to come, I have met some here today who are willing to come, I have just spoken to Ethiopian airline, they are willing to come. I think what we need to tell foreign airlines is that obviously, this is an emergency and a temporary arrangement and they should really work with us with that temporary arrangement and we are concerned about safety and comfort.” He said.

Also Speaking, the Managing Director of the Nigerian Airport Authority of Nigeria (FAAN), Engr. Seleh Dunoma , stated that everything the foreign airlines required to operate safe operations are on ground.

He stated that what the international airline should be worried about are the safety equipment and that Instrument Landing System (ILS) had been installed at the Kaduna Airport and that the runway is ok for flight operations.

Dunoma stated that foreign carrier had agreed to operate to the airport, adding that that explains why they together with the Acting President on the tour of facilities at the airport

According to him, “We are ready to take foreign airlines, all the things that they need for international operations are on ground, what is important actually, is the safety equipment they need, the ILS has been installed, the runway is good, the terminal building will be ready in the next five days, the acting president has directed the contractors to complete some items before the commencement of international flights.”

On his part, the Managing Director of the Nigerian Airspace Management Agency(NAMA), Capt. Fola Akinkuotu, while speaking after the inspection, said, “NAMA works to provide safety facilities because our work is Navigation, Surveillance and Communication, NAMA is very satisfied that it has done a good job. The glide scopes, the ILS are in place, we have the approach flight that actually complements the ILS. The mobile tower will moved from Abuja to this place on the night of March 7 once Abuja is closed. The NAMA engineers have been fantastic in installing many of these facilities.”