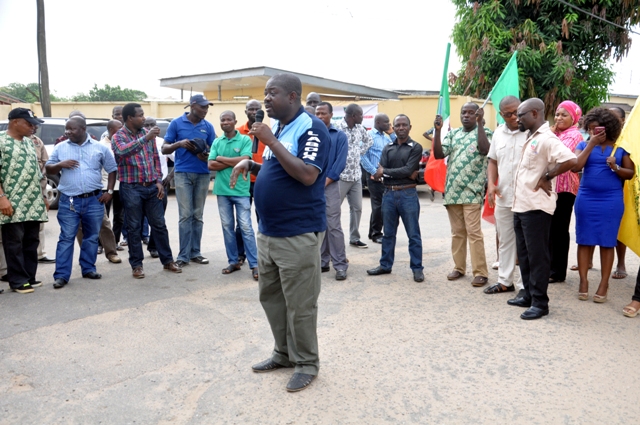 * General Secretary, National Union of Air Transport & Employees, (NUATE)Comrade Olayinka Abioye addressing the workers of the Federal Airport Authority of Nigeria, (FAAN) yesterday during the protest over the employment of (outsider) the new General Manager, Finance in FAAN and delay of the workers promotions

…Says Move Will Demoralise Workers In The Industry

Aviation Unions in the industry today stage a peaceful protest at the Murtala Muhammed Airport (MMA), Lagos over the lopsidedness in the recent appointments made by the Federal Government through the Ministry of Aviation following the gale of sack in the aviation agencies, which the unions are not comfortable with.

According to the unions, the appointments are tilted to favour a section of the country, wondering if it is only that part that constitutes Nigeria.

A close observation at the appointments from the Nigerian Civil Aviation Authority (NCAA) to the Federal Airports Authority of Nigeria (FAAN) and now to Accident Investigation Bureau (AIB), the story is the same.

Apart from that, the unions are equally protesting against the bringing in of a General Manager of Finance for FAAN from outside the agency when it has capable hands in agency that can man that position.

The labour groups maintained that the said position was for career civil servants.

Some of the placards displayed by workers reads, “FAAN has competent hands to made general manager, the decision by the Minister is unfair to workers in the agency, who have been aspiring to that position, FAAN workers have the capacity to be GM Finance among other.”

Addressing the protesters, the, General Secretary of NUATE, Comrade Olayinka Abioye, stated that the Minister of State for Aviation, Senator Hadi Sirika, had earlier assured the unions that external persons would not be given positions meant for career civil servants in the aviation industry . * General Secretary, National Association of Aircraft Pilots and Engineers, (NAAPE), Comrade Aba Ocheme addressing the workers of the Federal Airport Authority of Nigeria, (FAAN) yesterday during the protest over the employment of (outsider) as the new General Manager, Finance in FAAN and delay of the workers promotions.

According to Abioye, “After a critical analysis of the appointment, we have observed that there was an error in bringing in an outsider to head the Department of Finance, FAAN, and we are saying no to such appointment.”

He continued, “The position he is being given is a career position and the minister has already told us that he does not want outsiders to come and hijack any position in FAAN.”

He posited that aviation unions were also studying the recent political appointments carried out by the Federal Government in Accident Investigation Bureau (AIB) and Nigerian Civil Aviation Authority (NCAA).

In his words, “We have found some errors in those appointments and at the appropriate time, we will react even though the government has the prerogative power of appointment into any directorate level. We are going to communicate our position in writing to the minister because if this industry must move forward, only capable persons who have the prerequisite experiences should be given appointments.”

The National President of ATSSSAN, Comrade Mr Ilitrus Ahmadu, lamented that career civil servants were not given the opportunity to challenge those coming in from outside for such positions via written tests.

Speaking further, he said, “They need to prove that they are better than the people already on ground and that they deserve the jobs but unfortunately that has not been the case.”

On his part, the General Secretary, NAAPE, Comrade Aba Ocheme, contended that bringing external persons would demoralise workers in the sector, who according to him had put in many years only to be denied their legitimate aspirations.

According to him, “This will only make workers less productive and stunt the growth of the aviation industry in Nigeria.”

Be the first to comment on "(Updated) Aviation Unions Stage Peaceful Protest Over Recent Appointments, External GM Finance For FAAN, Other Issues"