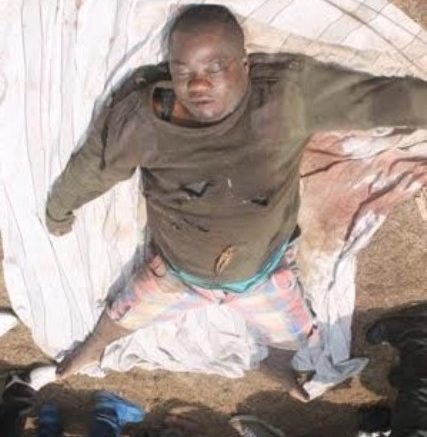 Police Press Release
PARADE OF VICIOUS AND NOTORIOUS KIDNAP FOR RANSOM GANG RESPONSIBLE FOR SEVERAL KIDNAPPINGS, ARMED ROBBERIES AND MURDER IN IMO AND OTHER STATES IN THE SOUTH EAST AT THE IMO STATE COMMAND HEADQUARTERS BY CSP JIMOH MOSHOOD, THE FORCE PUBLIC RELATIONS OFFICER FORCE HEADQUARTERS, ABUJA
ON 2ND OF MARCH, 2017
SUSPECTS
(i)                         HENRY CHIBUEZE AKA ‘VAMPIRE’ LEADER OF THE GANG (DIED IN GUN DUEL WITH THE POLICE)
(ii)                      OBINNA ELAH ‘M’ 26YRS, NATIVE OF ORLU L.G.A. IMO STATE; 2ND IN COMMAND OF THE KIDNAP GANG
(iii)                   ARINZE ABECHETA ‘M’ 24YRS, NATIVE OF OKOHIA, ISIALA MBANO L.G.A. IMO STATE.
(iv)                    CHUKWUEBUKA IKEAZOTA ‘M’ 23YRS, NATIVE OF OHOHIA, ISIALA MBANO L.G.A. IMO STATE.
(v)                       SAMUEL UGOCHUKWU ‘M’ 24YRS, NATIVE OF AROCHUKWU L.G.A ABIA STATE
(vi)                    CLIFFORD AHEANA ‘M’ OF OMU AWA IKWERRE L.G.A. RIVERS STATE.
EXHIBITS
(i)                        Five (5) AK 47 rifles
(ii)                    Three Hundred Rounds of AK 47 ammunition.
(iii)                 Charm recovered from the body of the deceased leader of the gang
The Inspector General of Police, IGP Ibrahim K. Idris, NPM, mni, concerned with the spate of kidnapping and other violent crimes in Imo and other South Eastern States deployed Police Special Forces led by Intelligence Response Team to these States.
The Police Special Forces working under the supervision of the Commissioner of Police, Imo State Police Command swooped on the hideout of Henry Chibueze aka ‘Vampire’ and his gang and engaged them in fierce gun battle that lasted several hours in the early hours of 02/03/2017 at Omu Awa forest Ikwerre L.G.A. of Rivers State.
This operation was successfully carried out as the dreaded, vicious and kidnap for ransom and armed robbery kingpin, Henry Chibueze aka ‘Vampire’ and his gang who were rescued by his criminal cohorts from the Owerri High Court premises on 27/01/2017 from the custody of Officers of the Nigeria Prisons Service died during the shootout with the Police Special Forces and all the other suspects mentioned above were arrested and the exhibits listed recovered from them.
Henry Chibueze aka ‘Vampire’ (deceased) was a cultist who later turned a vicious and dangerous kidnapper/armed robber, and was declared wanted since 2013. He was responsible for several cases of kidnappings, armed robberies, murder of notable and prominent personalities in Imo State and South Eastern/7South South States.
He had earlier confessed to the murder of his girlfriend Sandra and eight (8) members of her family, among them six (6) children in Lagos State. He alleged that the girlfriend stole his 45million naira share of 110million naira ransom paid by the family of one of his victims in Omoku, Rivers State.
He is a serial killer who also confessed to have killed over Two Hundred (200) people in various kidnappings and armed robbery attacks. He claimed responsibility for the murder of the following persons;
(i)                Placid Ejimadu (Nze Ji Obi)
(ii)       Jonathan Ibemere aka gwuogwuo and
(iv)                  Livinus Iwumune all natives of Agbaja Nwangele L.G.A. Imo State.
(v)                     The killing of an Honourable member of the Imo State House of Assembly at Orji in 2015
(vi)                  The kidnap/murder of a traditional rulers’ wife from Mbaise in 2015 whose corpse has not been seen till date.
(vii)              The kidnap/murder of a man from Malaysia at First Bank World Bank Branch Owerri.
(viii)           The killing of 3 members of a family including a woman from Nkwerre in 2012 after collecting ransom from the family
The living members of the Henry Chibueze aka ‘Vampire’ (deceased) gang have made useful statements to the police confessing and admitting to have carried out four (4) successful kidnap operations after the rescue of their gang leader at the Owerri High Court premises. They will all be charged to court on completion of investigation
The Inspector General of Police wishes to assure the good people of Imo State and other states of the Federation of adequate security and implore them to co-operate with the police personnel deployed in their localities.
CSP Moshood Jimoh
The Force Public RElations Officer
Share on Facebook Share
Share on TwitterTweet
Share on Google Plus Share
Share on Pinterest Share
Share on LinkedIn Share
Share on Digg Share

Be the first to comment on "Police Kills Notorious Armed Robber, Kidnapper ‘Vampire’"