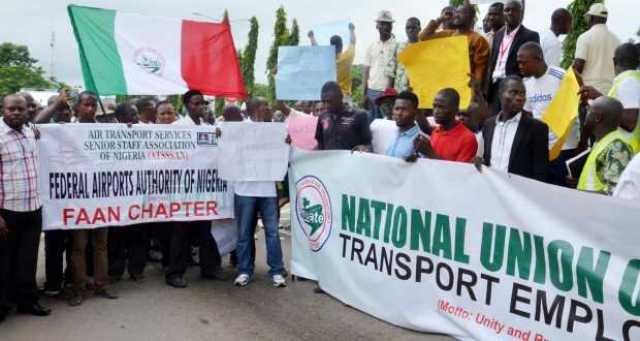 Aviation Unions in the industry today stage a peaceful protest at the Murtala Muhammed Airport(MMA)Lagos over the lopsidedness in the recent appointments made by the Federal Government through the Ministry of Aviation following the gale of sack in the aviation agencies, which the unions are not comfortable with.

According to the unions, the appointments are tilted to favour a section of the country, wondering if it is only that part that constitutes Nigeria.

A close observation at the appointments from the Nigerian Civil Aviation Authority (NCAA) to the Federal Airports Authority of Nigeria (FAAN) and now to Accident Investigation Bureau (AIB), the story is the same.

Apart from that, the unions are equally protesting against the bringing in of a General Manager of Finance for FAAN from outside the agency when it has capable hands in agency that can man that position.

Be the first to comment on "(Breaking News)Aviation Unions Stage Peaceful Over Recent Appointments, External GM Finance For FAAN, Other Issues"