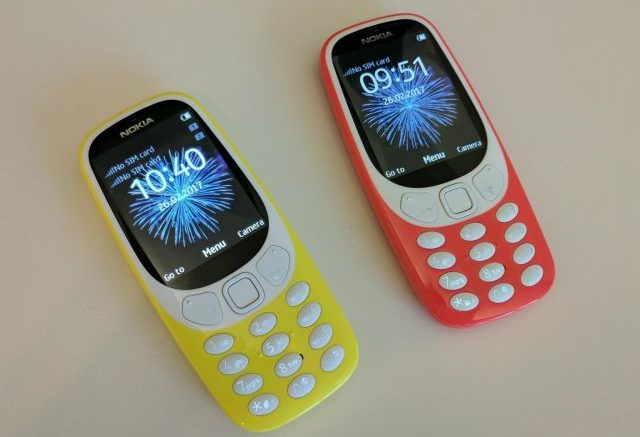 I’ve never been so engrossed by such a small lump of shiny plastic. I’m smiling giddily, incapable of pulling myself together. It’s a feeling of pure, nostalgia-fuelled joy.

I know full well that the new Nokia 3310 isn’t half as useful as the Smartphone I’ve already got in my pocket, but there’s something so immensely satisfying about seeing an old icon rise again.

Nokia 3310 purists may feign outrage at its new design and feature set, but they’re welcome to buy the original off Amazon.

I got to fiddle with glossy new yellow and red models, but matte grey and dark blue options will be available too. It’s incredibly pretty, slimmer than the 2000 model and positively tiny compared to most modern-day handsets, which takes a bit of getting used to.

It feels pretty solid too, but the smooth plastic on my hands-on sample doesn’t appear to be quite as reassuringly durable as the slightly rougher stuff encasing the old version. Unfortunately, I haven’t yet been able to put it to the test by conducting the usual checks, like throwing it off buildings and bouncing it off rocks.

The keypad is also alien to my touch screen-pampered fingers. My heart tells me to click my way to the Messages screen and crunch out a text, as I did all those years ago, but my brain’s struggling.

I instead poke and prod clumsily at the physical buttons, determined to rediscover my forgotten skill.

Nokia has altered the 3310’s main keys. The large blue button has been ditched, along with the ‘C’ and arrows buttons, and replaced by a square-shaped central keypad and ‘call’ and ‘end call’ buttons.

Once again, I find the keypad fiddly to use, my fingers accidentally pressing things they aren’t supposed to. I look at my hands with disgust.

Fortunately, my precision improves dramatically within a few minutes, but not before I’ve accidentally turned on the torch and enabled silent mode.

That’s right, it has a torch. Around the back is an LED flash, along with a very basic 2-megapixel camera, which is good enough to capture the crude, grainy types of pictures and videos that people of a certain age will remember spending their lunchtimes trying and failing to transfer to their school mates via Bluetooth.

The small 84 x 84 monochrome display has been replaced by a larger, sharper and far superior 320 x 240 colour screen too.

The original model’s battery life was outstanding, but technology has come a long way in the 17 years since its release, and so the new 3310 has even better stamina.

It offers an extraordinary 22 hours of talk time off a single charge, which is tenfold improvement, and will keep running for an entire month in standby mode.

It runs the familiar Nokia Series 30+, software that’s really easy to navigate once you’ve re-accustomed yourself with the phone’s physical keys, and comes pre-loaded with Snake and the Opera Mini browser, which you can use to surf the web on an extremely limited 2.5G connection if you’re really desperate to get online.

No matter how misty-eyed we can get about the 3310 of old, it’s quite clearly outdated, even for a feature phone. The new model stays true to its roots, but makes changes where changes needed to be made.

It’s the perfect secondary phone, one to use at events you might not want to take your pricier Smartphone to, like festivals.

My only complaint is that the famous ‘Connecting People’ handshake has been ditched.

Be the first to comment on "Nokia 3310 Hands-On Review: The World’s Most Reliable Phone, Even Better Than You Remember It"