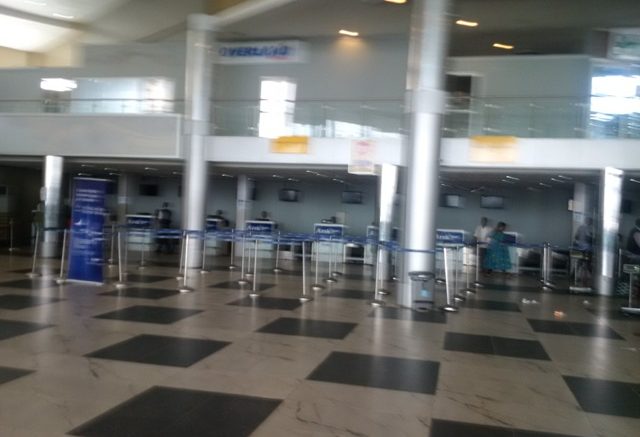 The Asset Management Corporation of Nigeria (AMCON) is alleged to have scaled down Arik Air operations to less than 30 per cent.

The airline, which at peak periods operates 120 flights a day now, operates about 15 flights daily with very low load factor.

Abelnewsng.com learnt that of the 28 operating aircraft only eight are now in operation, which includes two Bombardiers, CRJ 900, one Q400 and five Boeings 737.

It was further learnt that the Q400 is in a dedicated service with Chevron, which means the airline presently has seven operating aircraft.

The situation Abelnewsng.com learnt has forced Arik to cut down its domestic and regional operations, having suspended its international service immediately after AMCON took over the company.

Meanwhile, there are indications at the weekend that international financiers and other creditors of the airline have concluded arrangements to drag the Federal Government to court after 30 days of corporation management of the airline.

A source told the online medium that the creditors are putting their resources together for to harmonise their suit against the government for the airline’s failure to honour its international obligations.

The source further said that the airline’s workers who were owed two months’ salary; December and January before AMCON intervention in the management of the entity on February 8, 2017 were paid January salary and according to some of the workers who spoke on the condition of anonymity, AMCON said that December salary should be paid by the former management before it took over the company.

Also cabin crew whose November flight allowances were to be paid with December basic salary, who confided in the platform, said they are not quite confident the money would be paid now that AMCON said the former management should pay them December salary.

“We were actually owed two months salary before AMCON took over. I know that the Nigerian Civil Aviation Authority (NCAA) insisted that Arik must pay all of us all outstanding salary by December 31, which the airline did, after the labour strike, so it was December and January that was owed us” the source said.

Some workers of the embattled airline, who spoke on the condition of anonymity  told Abelnewsng.com that passengers had lost interest in the airline because of its non reliable on time flight services, flight delays, cancellations and I—don’t care-attitude of airline even before AMCON took over.

Speaking on the situation of the airline, an official said, “AMCON has not been able to restore the passengers’ confidence and because we have scaled down our flights, passengers would rather choose other airlines than come to Arik. Yesterday; February 25 we operated to Benin from Lagos with only 18 passengers going and on the return leg. It is only Port Harcourt service that we still have reasonable number of passengers.”

In another development, Nigeria has lost the West Coast and other African destinations to Asky, AWA and Ivory Coast national carrier because Arik has stopped most of its regional flight service.

Recalled that Arik Air is the only Nigerian airline that operates to Dakar, Senegal, Abidjan, Code’Ivoire, Luanda, Angola and Libreville, Gabon but after its takeover by AMCON it has stopped operating to most of these routes.

Prior to the takeover of the airline, it operated six flights to Accra from Abuja and Lagos and these flights have been scaled down to two since the AMCON take over and with many of the aircraft on the ground as AOG (Aircraft on Ground),

However, with the current situation of things, it is not clear if the airline would continue to operate any of these destinations in the West Coats

“What AMCON has done is that it has cut back flights because of inadequate supply of fuel but all the flights that it still operates are on time. So it has restored on time flights service but only 30 per cent of the flights or less are still operating. In the immediate past before their take over, Arik flights were characterized by delays and cancellations. It is really tough for AMCON to effectively manage the airline” a source said.