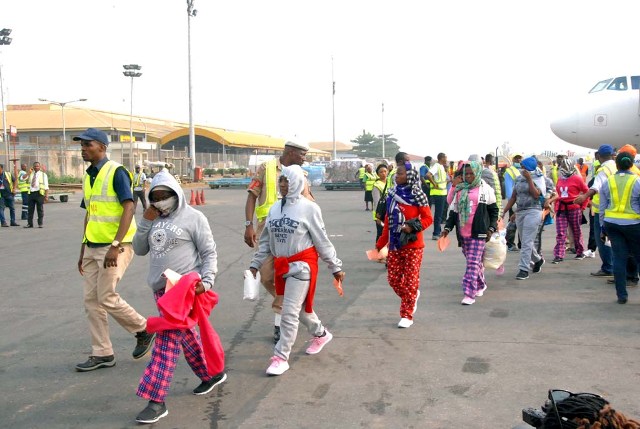 Some of the returnees from Libya on arrival at the Murtala Muhammed Airport, Ikeja, Lagos

Another batch of 171 Nigerians voluntarily returnees today returned from Libya aboard a chartered Nouvelair aircraft.

The aircraft that brought the returnees landed at the international wing of the Murtala Muhammed Airport(MMA),Lagos at about 4.18pm

The returnees, who were brought back by the International Organisation for Migration (IOM) in collaboration with the Nigerian Embassy in Libya were received at the Hajj Camp of the airport by  the Nigerian Immigration Service (NIS) , National Emergency Management Agency (NEMA) and the Federal Airports Authority of Nigeria (FAAN),the National Agency for the Protection of Trafficking in Persons (NAPTIP) and the Police

According to the Director, Search and Rescue, NEMA, Air Commodore Salisu Mohammed the 171 returnees comprises of 109 females, 49 males, seven children and six infants.

Speaking to journalists shortly after the returnees landed in Lagos, the Senior Special Assistant to the President on Foreign Affairs and Diaspora, Mrs Abike Dabiri-Erewa, commended the IOM for facilitating the return of the Nigerians.

“Like I told them, they are not criminals. These are people that have gone in search for greener pastures. However, it turned out to be a terrible experience for them. They shouldn’t be ashamed of themselves. Now they are back home and Mr President has personally conveyed his greetings to them and to let them know that they are back in Nigeria and there is no better time than now” He said

The Federal Government, IOM and some states, he disclosed  have made concrete arrangements to rehabilitate Nigerians, who according to her voluntarily return to Nigeria from Libya to reintegrate them into the society. One of the brutalised returnees from libya on arrival at the Murtala Muhammed International Airport,  Lagos

In her words, “The question is, how long are we going to keep evacuating them? So there is going to be another evacuation and a final one when we will tell Nigerians who are stranded in Libya to come back home. After that it will be difficult getting IOM to do the evacuation. A lot of them don’t know where they are going to. There is a lot of ignorance here. Some of them are trafficked and they get there with nothing.”

Recalled that a total of 161 Nigerians voluntarily returned one week ago from the war torn country.