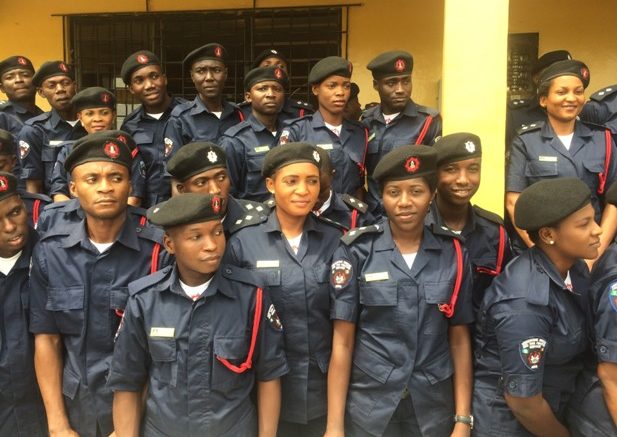 * Some of the Federal Airports Authority of Nigeria (FAAN) Airport Rescue and Fire Fighting Services (ARFFS) personnel in a group photograph shortly after the 2017 passing out parade yesterday at the Murtala Muhammed Airport (MMA), Lagos.

…As Dunoma Warns Against Temptation, Compromises

This just as the agency urged them to dedicate themselves to the service of FAAN, the Nigerian people and to all stakeholders in the aviation industry.

Speaking at the passing out ceremony of AVSEC and ARFFS at FAAN Staff School, Murtala Muhammed Airport (MMA), Lagos, at the weekend, the Managing Director of the agency, Engr Saleh Dunoma said that the event further demonstrates management’s commitment to human capacity development in order to meet the highest standards of professionalism and best industry practices.

Dunoma, who was represented by FAAN Director of Finance aand Accounts (DFA), Mr. Sadiku Abdulkadir Rafindadi commended the parade instructors and trainees for the impressive performance, professional carriage and excellent drill, stressing that the painstaking rehearsals and hard work have obviously paid off. The FAAN boss urged the 216 officers to remember all they have learnt to make and to make personal commitment to excel in their chosen career.

According to him, “This career path is challenging and rewarding. In the course of its pursuit, you have a great responsibility to live up to the vision of the Federal Airports Authority of Nigeria which is to be amongst the best airport groups in the world. You should be vigilant and ensure that you do not become the weak link in this value chain. While acknowledging the inherent challenges in your operations, you must guard against temptation, and compromises. You should always put service first before any other consideration, as this organization places integrity above all other things.”

The Managing Director also used the occasion to reaffirm FAAN’s commitment to human capacity development, which was demonstrated by the passing out officers, urging them to continue to give their best to the organisation.

While appreciating the efforts and unwavering support of the Minister of State Aviation, Senator Hadi Sirika, Dunoma equally commended the dedication and sacrifices of the Director of Human resources, training centre, AVSEC and ARFFS instructors, which have made the day successful.

In her address, Director of Human Resources and Administration, FAAN, Hajia Salamatu Umar-Eluwa, said the 216 commissioned officers have gone through three months training at FAAN training centre and that they are part of the online recruitment exercise that took place in 2015.

According to Hajia Umar-Eluwa, the first batch was trained between July and October last year and have since been integrated into the system. In her words, “You have been recruited to serve in the para-miltary arms of this organization where total discipline, professional conduct, unalloyed loyalty and special vigilance are required. I believe that the quality of training you have received has adequately prepared you for these. Our expectations of you are very high and I believe you have all it takes to exceed them.”

She continued, “I commend the instructors and coordinators of the training programme for their commitment to management’s vision. I also applaud the support my team and I received from the Managing Director in the course of implementing this training.”

The High point of the event was the excellent military -like passing out parade by the commissioned officers.

At the event, there was presentation of awards to distinguished officers while the band, fire fighting team, medical team and judokers openly demonstrated their emergency management process to the public.

In attendance were FAAN Executive Directors, members of the management team, heads of military and para – military organisations, FAAN workers and other stakeholders in the nation’s aviation sector.

Be the first to comment on "(Updated)FAAN Commissions 216 Aviation Security, Fire Officers"