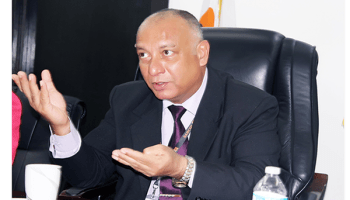 The Chief Executive Officer of Skyway Aviation Handling Company(SAHCOL),Mr. Rizwan Kadiri has stated that the ground handling company was still not certain who should pay the about N65 to N70 million  charges incurred by the controversial helicopters allegedly imported into the country by the Rivers State Government that was in its facility for months.

Recalled that Rivers state government was alleged to have imported two choppers at the twilight of Former Governor Rotimi Amaechi’s administration, which was not cleared before he left office thereby incurring into demurrage and other charges.

He said this while addressing journalists at the company’s corporate headquarters at the international wing of the Murtala Muhammed Airport(MMA),Lagos.

The CEO said that SAHCOL did not shield the identity of the owner but that it was just doing its job and that today the ground handling company don’t know who should pay the about the N65 to N70 million charges the choppers incurred while they were at SAHCO’s facility.

The ground handling company not wanting to disclose the indentify of the owner of the civil model of Bell helicopters had said that they were imported into the country by unknown persons.

The Chief Executive Officer disclosed that the ground handling company export 20 tons per day from SAHCOL facility, adding that some of the products being exported from the handlers facility are yam , vegetable among others .

He mentioned that one of the challenges facing the ground handling company is the non availability of funds and ever rising cost of the Dollars.

Going forward, the CEO said that the ground handling company will enhance service level, service delivery and ease the way business is done.

On SAHCOL’s target for 2017, he stated that the entity would increase its infrastructure to meet the customers demand, adding that the company would also continue to improve its products ,service and give the best to its numerous customers.

On the planned closure of the Nnamdi Azikwe Airport (MMA),Lagos, to overhaul the runway, the SAHCOL boss stated that the company was happy with what the Federal Government is doing and that it could not have come at a better time than now.

According to him, “We happy with the Federal Government is doing. It is over due. The government is on the right track.”

He however added that despite the fact that the idea to close the runway is good, the government did not carry all the stakeholders along before the decision was taken.

On the decision that foreign airline will not be operating to Kaduna Airport, which is the alternate airport, he said that it would cost SAHCOL to lose a lot of revenue, adding that Abuja Airport is the ground handling company’s strong hold.

In his words, “We are going to lose a lot of revenue if the airlines are not flying to Abuja which is our bread and butter.”

Speaking on how to improve export, the SAHCOL boss stated that the farmers are very ready, adding that what is lacking is how to send the products out.

Government, he posited must encourage farmers in the country by giving them seeds, funds, tractors which would assist them produce in large quantity for export.

He also advised government to do certification for the products being exported, by ensuring that these products are well packaged to get wide acceptability adding that packaging of the products to be exported is very essential.

On SAHCOL’s market share, he stated that the company was doing very well in the industry despite the recession and other challenges, informing that as part of efforts to increase its revenue profile, the ground handling company would float a travel agency.

Be the first to comment on "Controversial Bell Helicopters: SAHCOL Uncertain Over Who Pays N65M Charges"