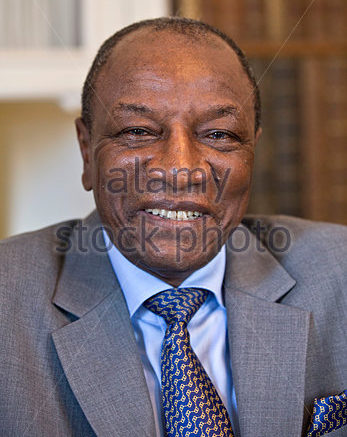 Conde, who was elected during their 28th Ordinary Session holding in Addis Ababa, Ethiopia, takes over from the President of the Republic of Chad, His Excellency, Mr. Idriss Deby Itno, as the new Chairman of the African Union for the year 2017.

At the handing over ceremony, the outgoing Chairman of the Union, President Idriss Debby commended his peers and the AU Commission for the support they gave him during his mandate.

He also commended the AU Commission under the leadership of H.E. Dr. Nkosazana Dlamini Zuma for the good work in pursuing the transformation reforms under Agenda 2063 and for the support she gave him during his mandate.

President Debby said he had the privilege as Chair of the Union to travel all over the continent and beyond with the view of putting Africa First and presenting the developmental goals pursued by the continent.

He said, he had the opportunity in this capacity to visit many African countries and he cherished the moments when he met with the young people who are the future of tomorrow.

According to him, “It was an honour to guide our Organisation to implement its vision of the Africa We Want.”

He further underscored the need for the continent to be peaceful, united and prosperous, noting that  the African Stand by Force has to be effectively operationalised to ensure play its rightful role in ensuring peace and security within the continent.

Before handing over the symbols of the Union to his successor, President Idriss Deby of Chad assured President Conde of Guinea that he can count on his continued support.

Speaking earlier, the Chairman of the AU Commission, Dr. Dlamini Zuma thanked the outgoing Chairman of the Union, for the excellent cooperation and guidance offered during his term in 2017, “including the politics and history classes that punctuated the deliberations, and that kept us engaged.”

The newly elected Chair of the Union, President Alpha Conde, hailed the outgoing Chairperson for his Pan African spirit and commitment to put Africa’s Agenda at the center of priorities during his term as Chair of the Union.

President Conde highlighted in his acceptance speech the major programs to be undertaken during his mandate.

He will have among other important duties to ensure the implementation by AU Member States the theme of the year 2017: “Harnessing the Demographic Dividend through Investments in Youth”.

He is also expected to further mobilise the continent to implement the AU Agenda 2063 with the view to place Africa as a key player in the global arena.