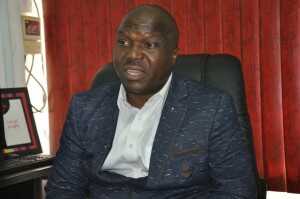 The President of World Federation of Trade Unions (WFTU), Comrade Mzwandile Makwayiba has said that the body has not come to replace the role of trade unions in Nigeria, Africa and other labour centres but to strengthen and raise a bigger vision and provide larger perspective for labour unions.

He made the clarification today at the National Union of Food, Beverage and Tobacco Employees (NUFBTE) while addressing Nigerian journalists as part of the process to round off his three—day official visit to Nigeria.

This is just as he informed that Nigeria affiliates of WFTU has agreed to host the African Regional Conference of WFTU scheduled to take place in July but in a venue in the country that is yet to be decided.

He stated that the conference of all trade unions in the continent became necessary to forge a common agenda for WFTU in Africa and define a common approach to issues affecting workers in the continent including the issue of minimum wage, common labour laws among others.

Mzwandile further stated that the proposed conference billed for Nigeria would serve as an effective mechanism of overcoming neo –colonial barriers and integrated continental efforts. He however, added that other trade unions in South Africa in collaboration with WFTU have been able pursue a law that prevents  workers from remaining  casuals after three months, but that the law is under contention in the law court.

Mzwandile pointed out that Shoprite, MTN and other companies does the same thing in South Africa, assuring that he would raise the issue about these companies with appropriate authority.

On what WFTU has achieved since it came into existence in 1945, he said that the body was at the forefront of the struggle against Apartheid regime in South Africa, fought for Namibia independence and that the organisation was also very instrumental to the fight against child labour.

WFTU, the President noted equally made it possible for former President Olusegun Obasanjo led administration to discuss on how to pay the entitlements of the workers of the moribund Nigeria Airways Limited(NAL),that was liquidated in 2004 .

He said the organisation did this by writing to the then President on the issue, an effort, he said most people were not privy to.

“We think WFTU has done tremendously well all these years “he said.

Speaking on whether the organisation’s assistance to some countries does not amount to delving into politics, the President of Mzwandile, said that WFTU as part of its agenda also assists countries that are struggling such as Palestine because the Palestinian struggle affects the people as citizens and as workers.

Reacting, to a situation in Nigeria, where employers force workers to sign documents that they will not belong to union, he stated that any employer that does that in South Africa would be jailed for one month and that there is a law to that effect.

According to him, “It is illegal. This law did not come easy .Many people died during the struggle to have this law. That is why we need the July Regional Conference, where we can brainstorm and take a common position.”

He stated that achieving a common labour law that would be beneficial to all would require a collective effort.

WFTU was established in October 3, 1945 to replace the International Federation of Trade Unions. Its mission was to bring together trade unions across the world in a single international organisation, much like the United Nations.

Be the first to comment on "WFTU Is In Nigeria To Strengthen, Raise Bigger Vision For Labour Unions——- Mzwandile"