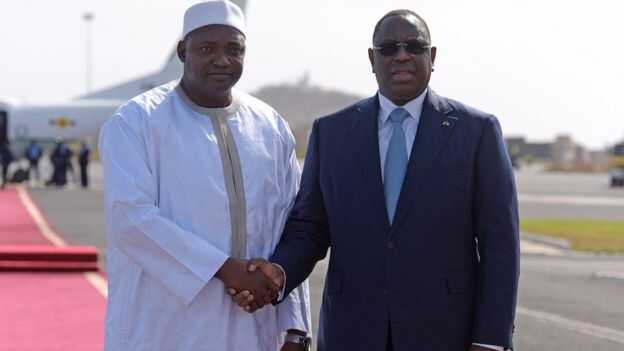 Gambia’s President Adama Barrow has returned to the country to assume power – days after his predecessor Yahya Jammeh left to go into exile.

President Barrow’s plane touched down at Banjul airport, where jubilant crowds waited to welcome him. After landing, he tweeted: “I’m finally home #Gambia.”

Mr Barrow, who has been in neighbouring Senegal, won elections in December.

However a handover was stalled when Mr Jammeh, Gambia’s president of 22 years, refused to step aside.

Barrow, dressed in white robes and a cap, stepped off the plane in Banjul as heavily armed troops from Senegal and Nigeria stood by.

He was sworn in as president at the Gambian Embassy in Senegal a week ago, but a public inauguration on home soil is planned soon, aides say.

Earlier, Barrow, 51, said he expected a “big, big welcome” when he arrived back in Banjul.

He told the International Business Times UK: “I think it will be the biggest in the history of our country.”

He added that he was “very excited” after the “very difficult transition”.

The president is being accompanied by the UN envoy for West Africa, Mohamed Ibn Chambas.

He has said the UN will help uphold security in The Gambia.

Several thousand West African soldiers remain in The Gambia amid reports that rogue pro-Jammeh elements are embedded in the country’s security forces.

The West African force had threatened to drive Mr Jammeh from office if he did not agree to go.

The new president has asked for the force to remain in The Gambia for six months.

A new inauguration will be organised soon at the national stadium in Banjul, his spokesman Halifa Sallah said.

“It will be an occasion to show strength. Everyone will be invited. The president will address his people,” he told Senegalese radio.

Jammeh, who was a 29-year-old army lieutenant when he came to power in a 1994 coup, had refused to accept the results of the December election.

After his departure, reports emerged that more than $11m (£8.8m) had disappeared from The Gambia’s state coffers.

However a presidential adviser said the police had been asked to investigate and would determine if anything was missing.

Jammeh has not commented on the allegations.

In other developments, parliament has cancelled the state of emergency declared by Jammeh last week.

It also revoked legislation that would have extended its life for a further 90 days.