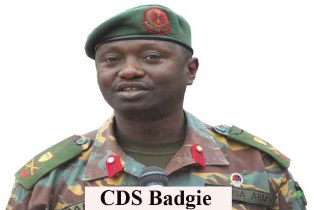 …Says Only The President Can Decide That

The Chief of Defence Staff (CDS), Gambia,  General Ousman Badjie has stated that he was ready to work with President Adama Barrow .

He continued, “It depends on the new president, our new commander-in-chief, as well as our new minister of defence.”

The military, he stated would remain united.

Jammeh, who departed Banjul, the Gambian capital on Saturday night was forced to go exile after West African countries led by Senegal and Nigeria contributed troops to forcefully remove him from office if he fails to leave office.

The countries under the aegis of Economic Community of West African States( ECOWAS(,were also by the continental body the African Union(AU)and world body; the United Nations.