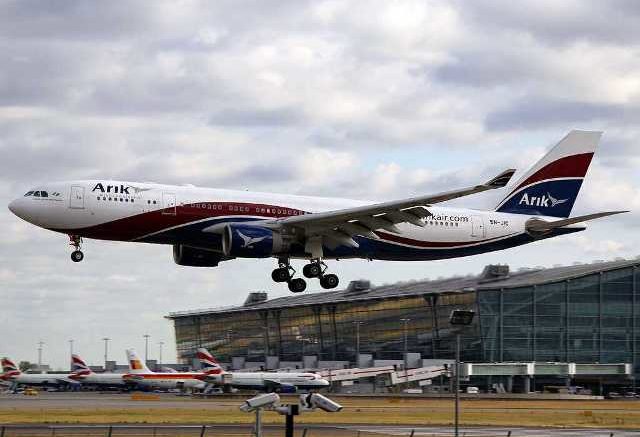 Trouble is again brewing between aviation unions and Arik Air, as the former has threatened to shut down the operations of the airline as a result of the latter’s alleged refusal   to review cases of staff wrongly laid off as agreed in December 2016 when its operations were grounded.

They also alleged that the airline despite signing an undertaking to obey the law concerning unionisation of its staff, the airline has failed to honour it.

The unions, who have threatened to picket the airline’s operations, alleged that the management of the airline has not only been avoiding the unions, it has also not implemented the resolutions reached in 2016.

The unions made the threat in a petition dated January 17, 2016 with the reference number NUATE.GS/DG.NCAA/ENP/002-17,signed by the General Secretaries of the three unions, Comrade Olayinka Abioye, NUATE, Comrade Frances Akinjole, ATSSSAN and Aba Ocheme for NAAPE.

The petition was addressed to the Director-General of the Nigerian Civil Aviation Authority (NCAA), Capt. Muhtar Usman and which was copied to the Managing Director of the airline, Mr. Chris Ndulue and the Minister of Labour, Dr. Chris Ngige.

The unions said that they decided to petition NCAA because it mediated in the closing down of the airline last December, adding that the management of the airline failed to comply with the agreement reached in two critical areas.

One of the issues is the airline’s failure to review cases of staff wrongly laid off that was to be inaugurated on the January 10, 2017.

The unions stated that after much effort through calls and email, the management of the airline requested a week’s postponement.

The unions also said the airline also failed to honour  the obey the law with regard to unionisation despite signing an undertaking, adding that the unions were yet to receive positive response to the list forwarded to its members, who have declared their intention in writing.

“It may interest you to note again that today, 17/01/2017, the management still failed to be available for the event that was postponed at their instance without any reason whatsoever for their absence. These matters are hereby brought to your attention as the mediator on the dispute for your information and necessary intervention to avoid any untoward consequences. As we shall not accept responsibility for any breakdown in industrial relations at Arik Air as a consequence of the reported reckless actions on the part of the management, especially considering that we did warn at the meeting that Arik Air we know would not comply with the management” the petition reads in part.

Abelnewsng.com recalled that aviation unions in December, 2016 grounded the airline’s operations following the alleged maltreatment of its workers.

The unions had also accused the management of deducting taxes from workers’ salaries without remitting to the appropriate authority while their members in the airline were also owed seven months salaries.

Attempts by Abelnewsng.com to get Arik Air’s official reaction from the Communication and Public Relations Manager, Adebanji Ola failed as he did not respond to the mail and text message sent to him on the issue.

Be the first to comment on "Unions Threaten To Picket Arik Air Over Failure To Implement Dec. 2016 Agreement"