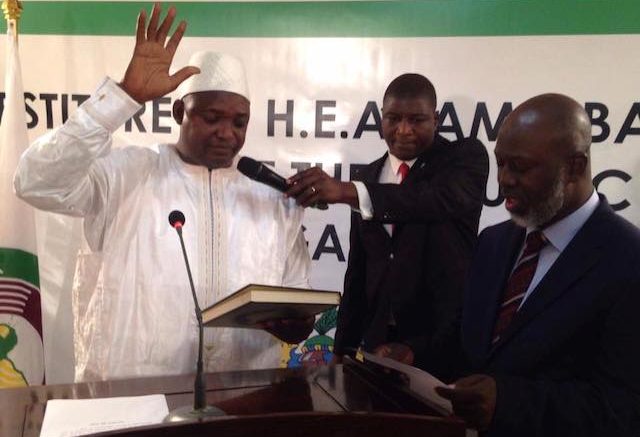 Senegal’s military entered Gambia on Thursday, an army spokesman said, as part of regional efforts to support its new President Adama Barrow and remove longtime ruler Yahya Jammeh, who has refused to step down after last month’s election.

Barrow took the oath of office as Gambia’s president on Thursday at its embassy in neighboring Senegal, calling for international support from West Africa’s Economic Community of West African States(ECOWAS) bloc, the African Union and the United Nations.

Nigeria, which pre-positioned war planes and helicopters in Dakar, said in a statement that it had also deployed military assets “to protect the people of the Gambia and maintain sub-regional peace and security.” It was not immediately clear, however, if they too had crossed the border.

“This is a day no Gambian will ever forget,” Barrow said after taking the oath, which was administered by the president of Gambia’s bar association. “Our national flag will now fly high among the most democratic nations of the world.”

“I hereby make an explicit appeal to ECOWAS, the (African Union) and the UN… to support the government and people of the Gambia in enforcing their will, restoring their sovereignty and constitutional legitimacy,” he said.

ECOWAS has been attempting to persuade Jammeh to quit for weeks, and has failed to do so, despite his increasing political isolation and last ditch efforts to reason with him overnight.

Jammeh, in power since a 1994 coup and whose mandate ended overnight, initially conceded defeat to Barrow following a Dec. 1 election before back-tracking, saying the vote was flawed.

“THE DICTATOR IS OUT”

Hundreds of Gambians celebrated in the streets, cautiously at first, and then gradually in larger numbers as they realised the security forces looking on were not going to open fire.

Cars whizzed up and down the highway lined with iron-roofed shops in the pro-Barrow Serrekunda district of Banjul, with horns honking and people hanging out of the windows.

“The dictator is out,” shouted pharmacist Lamine Jao, 30, as others cheered and whistled in agreement. “It’s just a question of time. We’ll soon flush him out. Believe me,” he said.

During the brief inauguration speech, Barrow asserted his new role as commander and chief of Gambia’s armed services, ordering soldiers to stay calm and remain in their barracks. Those who did not would be considered rebels, he said.

ECOWAS and the African Union have said they will recognize Barrow from Thursday and nations including the United Kingdom and France were quick to congratulate Barrow.

U.N. Secretary-General Antonio Guterres in a statement pledged “his full support for his (Barrow’s) determination, and ECOWAS’s historic decision, with the unanimous backing of the Security Council, to restore the rule of law in The Gambia so as to honor and respect the will of the Gambian people.”

Barrow gave the oath in a tiny room in Gambia’s embassy in the Senegalese capital, Dakar, and many of those present broke into the Gambian national anthem once he had completed it.

Outside the building on a residential street amid a heavy security presence, dozens of Gambians listened to the ceremony through loudspeakers.

“It’s very sad to be swearing in a president in someone else’s country,” said Fatou Silla, 33, a businesswoman who fled Gambia with her son a week ago.

A Senior Aide to Barrow said that arrangements would be made for him to return to Gambia though it was unclear when or how.

At a bar in the Gambian capital Banjul’s popular Senegambia strip, people crowded around a television to watch the swearing in and cheered and danced when it was over.

“We have been suffering for 22 years and now things will be different,” said a cashier who only gave her name as Fama.

It was unclear what Jammeh’s next move would be.

He faces almost total diplomatic isolation and a government riddled by defections. In the biggest loss yet, Vice President Isatou Njie Saidy, who has held the role since 1997, quit on Wednesday, a government source and a family member told Reuters.

Gambia’s long, sandy beaches have made it a prime destination for tourists but Jammeh, who once vowed to rule for “a billion years”, has also earned a reputation for rights abuses and stifling dissent.

He has ignored pressure to step aside and offers of exile.