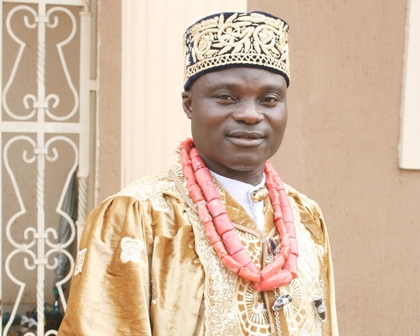 Prince (Comrade) Emmanuel Jaja, Great Grand Son of the famous King Jaja of the Opobo kingdom is the First Deputy President of the Air Transport Senior Staff Services Association of Nigeria (ATSSSAN) and also ATSSSAN representative to the Trade Union Congress (TUC). In this pre-election interview, the unionist spoke on his vision for association if re-elected in the January 27th 2017 election in Ijebu-Ode, Ogun State and what ATSSSAN has achieved in the last 1o years. Excerpt.

You have been with ATSSSAN for over a decade, how has the journey been?

Like every journey and steps individuals, organisations, even nations takes, it has been positive and learning and growing processes. l wouldn’t say negative in the true sense of the word because sometimes we win, most times we learn from that we couldn’t achieve. ATSSSAN have achieved a lot in the past 10 years, take for instance, during my first term with Comrade Solomon Ohioma, by God’s grace we were able to acquire a property from the defunct Nigeria Airways to serve as ATSSSAN secretariat. The place was further redevelop for optimum use during the era of the outgoing President, Comrade Benjamin Okewu. That secretariat has become a reference point for the association which is located along the international wing of the Murtala Muhammad Airport, Lagos

In terms of popularity and vibrant unionism, ATSSSAN no doubt is the leading labour group and is a house hold name in the industry, in West Africa and the continent of Africa as well around the globe anytime and anywhere you made mention of aviation and Nigeria.

Over the years, we have been working tirelessly to ensure that the aviation sector did not go down in Nigeria. I can proudly tell you also that there is nothing that will take place in the industry without the input and contribution of ATSSSAN. This is attributed to the responsive mechanism the able leadership has built and put in place over the years as well as the good leadership exhibited by all those charged with those responsibilities.

How will you describe the decision for a change of leadership at ATSSSAN?

As senior staff of our various organisations, it behold on us to take leadership positions so we cannot afford to fail the sector and the country at large. That is why this election is a defining moment for Nigeria aviation; for the development of the sector and for us leaders of the most vibrant and leading union in the sector.

We are aware of the huge expectation from the various stakeholders in the industry both within and outside Nigeria. That is why we have up our ante among ourselves. We are aware of the huge impact the decisions we arrived at will affect the industry, so we are not resting on our oars to ensure that we elect capable and experience hands to take over the leadership of ATSSSAN from Okewu.

Which of the positions are you vying for this time?

I have decided again to vie for the First Deputy President because if you look at the sector we have both the public and the private sector and because of the numerical strength of the public sector; I mean the likes of FAAN, NCAA, NAMA and others, while the private sector like Bristow, Aero, SAHCOL, Aero and others, we want a balance in the offices, either sector must not be seen to override the other in the distribution of offices.

You have seen the progress and development of ATSSSAN for over a 10 years, what new development do you intend to bring if elected into office?

The present leadership has put in place a platform and a template, which any incoming leader can easily build on. It is someone we can rely on to reposition the association. The past leadership has put ATSSSAN on the world map internationally and on the domestic scene, we are well known. ATSSSAN is well represented in the Nigeria Labour Congress and Trade Union Congress. We are looking at building on those successes and explore new avenue, opportunities and ways of promoting the country’s aviation sector, the welfare of the workforce and the general uplifting of the industry.

We will continue to ensure the industry compete with others on the global scale favourably and take leadership position on the Africa continent. This is why capable hands must be elected who can take the mantle of leadership and lead the workforce to achieve set goals.

How will the incoming leadership avoid been rubber stamped of DGs, MD and the Minister?

The way things are structured in government parastatals, staff are answerable to their heads, be it DGs or MDs, especially the minister, who is the overall boss of the sector. In the private sector, we are also answerable to our MDs. We try to ensure that we marry both scenarios together and ensure that conflict does not arise. We will dialogue where necessary and equally demands what is due us when the need arise. Some of the political appointment will come and go but the industry remains, so we cannot afford to toy with the things that are central to the survival of the industry. For over a decade now, we have seen more than five Ministers come and go but the industry remains and keep evolving alongside with global practices, while we stakeholders continues to work, so we cannot just fold our hands and watch anyone destroyed the industry. We are guided by laws and everything we do are guided by both local and internationals rules and regulations. We will abide by constitution and make sure things are done accordingly.

What do you think is your selling point in the coming election?

To God be the glory, experience they said is not acquired overnight. I work in the private sector. There is no DG, MD or leader of any of the government parastatals that will bamboozle me into taking decisions that are inimical to the progress of the members of the association as well the industry if elected. I am grounded very well in this sector and l am committed to speaking the truth and presents the facts of the matters always and l will ensure we work on facts at all time. As we work in the 21st century, unionism is no longer about fighting and constant confrontations, it is about presenting your side of the matter convincingly and let the facts speaks for themselves. Only then can we achieve set goals and that way no CEO or Ministry official will be able to twist you to sooth their purposes. This is why someone like me is vying for elective post so that with my experiences, l can represent our faithful members during such periods.

How do you intend to build bridges with other unions to move the sector to a new level?

Over the years we have developed a cordial and sister relationship with other unions and this has helped tremendously in not only our capacity to negotiate, but also in taking stands during disagreement with employers. The three recognised unions, ATSSSAN, NAAPE and NUATE have existed and related well over the years. Take the issue of Arik Air recently, we all took a stand on the matter and that unity brought about a change in the position of the airline management. It is said that any divided house cannot stand. The new leadership will surely build on this and many other relationships with other sectorial and professional bodies with the aim to repositioning the aviation sector. I will ensure we continue to extend the hands of fellowship to these unions so that whenever we call, they give us the solidarity.

Should you have an opponent from the public sector where it is believed a larger percentage of ATSSSAN members are based, what are your chances of winning the election?

Well, we are going into an election, and the only thing you should prepare your mind for is either you win or you learn lessons, not necessarily losing. I have no doubt l may have an opponent, what matters is that the electorate know the candidates they are voting for, and their credentials and potential. I can tell you l will emerge victorious in Ijebu-Ode come January 27. I have worked with most of them over a decade, we have built relationship and they already know who l am and my philosophy of life, my stance on matters of their welfares. I  have represented them in various capacities, at conferences and symposiums, both locally and internationally. So they already know who Prince Emmanuel Jaja is. No doubt one of the criteria delegates will take into cognizance is the aspirants’ integrity over the years; another is the capability and capacity to carry everyone along, the challenges and one who can stand no matter the challenge.

Workers are generally interested in their welfare, how will you and your new leadership address issues relating to that if elected?

We all know that staff welfare is a matter that has to do with condition of service, the leadership under which l will serve will not toy with that. We will not compromise on anything that will jeopardise the welfare of workers in the industry, not only those who belong to ATSSSAN but everyone. Conditions of services are spelt out, so we must pursue everything and make sure workers get everything they are entitle to get as workers in the industry. It is not negotiable, but however, should situation arises, whereby we need to negotiate, we will do that with open mind and ensure we arrive at an amicable and acceptable agreement that is beneficial to those we represent. Nobody will left alone in the struggle, our slogan is an injury to one is an injury to all.

What makes you think you have an edge over your opponents?

I have worked tirelessly to promote the ideals, aspirations and promote the vision of ATSSSAN over a decade. Having worked over the same period in the industry, that tells you l have firsthand knowledge of the nitty-gritty and modus –operandi of both the public and the private sector. I have been involved in collective bargaining in these two sectors at different stages; in negotiation of condition of services for workers in the sectors. l have gone the extra miles to propagate the ideals of ATSSSAN to our stakeholders both with and outside Nigeria. So if anyone is well prepared for the job, that person is Comrade Emmanuel Jaja.

What is your message to fellow contestants and opponents?

We are going for an election, a crucial no doubt because of the position ATSSSAN occupy in the industry. We cannot afford to fail. I am confident we will emerge stronger and united after the poll. We have been brothers and sisters, so we will and must ensure we conduct a successful election. We simply want to continue from where the present leadership hand over. I advice my co-contestants to exhibit the maturity we are known for; devoid of rancor and internal wrangling irrespective of the out-come of the election we will be transparent.

Be the first to comment on "We Will Build On Past Successes, Explore New Avenue, Opportunities——–Jaja"