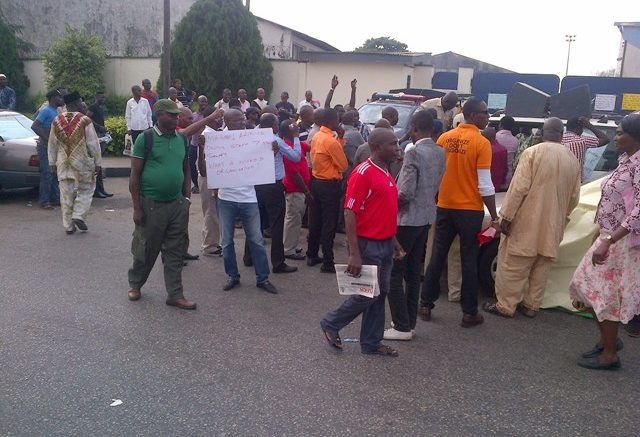 The major aviation unions have threatened to completely shut down the airline yesterday, a threat they carried out by ensuring that the airline’s flight did not take off or land in any of the airport in the country.

They cited the seven month salary arrears, non compliance with Nigerian Expatriate Law,  failure by the airline to allow the workers to unionise among others.

When abelnewsng.com visited the General Aviation Terminal (GAT) also known as Terminal 1, Murtala Muhammed Airport (MMA), Lagos, the 14 tickets counters and all the Check- in counters were completely deserted by the staff, while passengers who had bought the airline’s tickets were seen seating on the few available chairs at the departure hall while others were seen standing in the gazing at Arik Air probably wondering in their minds what must have happened to the airline. While Arik Air was busy locking horns with aviation unions, other airline at the GAT such as Dana Air, Medview Airlines and Overland took advantage of the brouhaha, as their ticket counters and check –in counters witnessed some queues.

At the other end of the terminal, where Air Peace operate , the departure hall was filled with both Air Peace loyal passengers and those, who had wanted to fly Arik Air but could not make due to the ongoing industrial battle between the unions and the airline.

One of the female passengers, who managed to speak to abelnewsng.com, but who preferred to remain anonymous, when the platform visited the terminal, said she bought the airline’s ticket to fly to Abuja but that she has been here for the past 45 minutes but discovered that the airline’s counters were empty, adding that at the moment she does not know what to do.

Other stranded Arik Air passengers were seen at the terminal wearing long faces but not willing to speak on the matter.

As at 3 pm today, the unions were still at the main entrance of the airline’s headquarters at the Murtala Muhammed Airport (MMA), Lagos, with placards and singing solidarity songs. Some of the placards read, “Rationality ends where hunger begins and to know also the joy of labour is the beginning of higher productivity, Every worker has the right to working condition when respect has safety, health and dignity, Modern slavery in Arik Air, we say no to slavery, every worker has the right to protection against unjustified dismissal in accordance with union law and national laws and practices, disgruntled worker is an accident waiting to happen.”

To prevent break down of law and order, a detachment of the Nigeria Police from the Airport Police Command were seen at the entrance of the airline’s gate with a Toyota Hilux car monitoring the situation.

But in a swift reaction, the Public Relations & Communications Manager, Arik Air, Adebanji Ola, in an online statement expressed dismay and disappointment that a group of aviation unions have ambushed and disrupted the operations of the airline from early hours of Tuesday, December 20, 2016 by occupying its head office premises and preventing staff from gaining access to their workplace.

He stated that the representatives of the protesting unions also prevented the staff of the airline from gaining access to the General Aviation Terminal (GAT) and the Murtala Muhammed International Airport, disabling the checking-in of passengers for both domestic and international flights.

According to him, “Access to the airport terminals is fundamental to the airline’s operations for movement of its personnel to ready and dispatch our aircraft for various flights. The aviation unions under the aegis of National Association of Aircraft Pilots and Engineers (NAAPE), National Union of Air Transport Employees (NUATE) and Air Traffic Senior Staff Association of Nigeria (ATSSAN) are protesting the non-unionisation of Arik Air staff who are not members of any of these protesting unions.”

Adebanji stated that the union leadership had earlier written a letter to the management of Arik Air on their grievances and that a meeting had been scheduled between the two parties for Wednesday, December 21, 2016.

He however added that the unions did not wait for the scheduled meeting or the outcome of the meeting, before embarking on such disruptive and strong-arm tactics against the airline.

According to him, “The unions have demonstrated total disregard for the laws of Federal Republic of Nigeria by interfering in the operations of the airline and preventing airline staff from carrying on with their duties of handling the passengers booked for today’s flights.”

He said that the decision not to join the aviation unions was that of the generality of Arik Air and that the management of the airline was not involved in any manner and or can it influence such individual decisions in any form since unionism is a free will and not a matter of compulsion.

The airline appealed to security agencies, the Minister of Aviation, Senator Hadi Sirika, the Nigeria Civil Aviation Authority (NCAA), the Federal Airports Authority of Nigeria (FAAN), Nigeria Airspace Management Agency (NAMA) and all the other stakeholders in the industry to prevail on these aviation unions to allow for operations to commence immediately since this unjustifiable disruption by the unions has already inconvenienced the travel plans of thousands of passengers today.

The airline apologised to its esteemed passengers for any inconvenience experienced due to this unwarranted disruption and unlawful action by the unions.