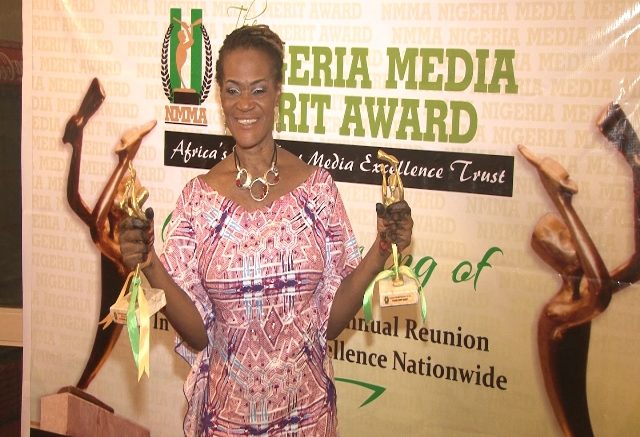 …As Court Adjourns Her Case Against Cross River State Carnival Commission To Jan. 29.

The Executive Producer of Thru’ The Eyes Of An African (TTEOAA), Yvonne Bassey, who has become a reference point in the media promotion of travel and tourism in Africa through TV documentaries, has once again emerged winner of two Nigeria Media Merit Awards, (NMMA) 2016.

This is just as Bassey that the case she instituted against the Cross River State Government, Cross River State Carnival Commission and Mr Gabriel Onah, has been adjourned till January 29, 2017 at the Calabar High Court.

She clinched the award for Television Programme of the Year as well as for Television Reporter of The Year, bringing the number of awards she has been honoured with by NMMA in all is 10. She dedicated her ninth award to her late driver, Mr. Ojo, who died in a ghastly motor accident in which Ms. Yvonne Bassey sustained a fractured neck injury.

In her acceptance speech shortly after receiving the awards, she took a few minutes to explain the circumstances surrounding the unfortunate accident.

According her the award winner, “I am dedicating this award to my late driver Mr. Ojo, who died in a ghastly motor accident of which I was a part, leaving me with a painful fractured neck up till date. We were on a mission to Cross River State to demand payment for a documentary job, duly executed for the Cross River State Carnival Commission, since 2013. Narrating her ordeal, she stated that The Calabar Carnival documentary was commissioned by the Chairman, Mr Gabriel Onah, who approved the project, asked her to execute it with her personal funds, after which she would be paid the agreed amount they both agreed on.

She however lamented that despite completing the project, the painful trauma she has been going through and loss of life, she has not been paid up till date.

Commenting on the dedication of her two most recent awards to her late driver, her legal counsel from Festus Keyamo`s Chambers, Barrister Omonade Matthew, condemned what he described as the maltreatment and injustice which Nigerian Journalists are subjected to on a daily basis, saying that it is unacceptable in a civilised society.

Barrister Omonade, who is representing Yvonne Bassey in the court case against the Cross River State Government, Cross River State Carnival Commission and Mr Gabriel Onah, noted that Cross River State, (inclusive of all state governments), should be honourable enough to fulfill their obligations in respect of contracts entered into by them.

Be the first to comment on "Yvonne Bassey Wins NMMA Tv Programme Of The Year, Dedicates Award To Late Driver"