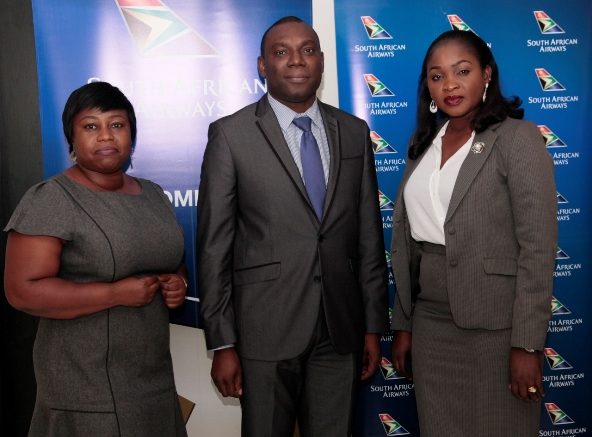 As part of efforts to assure its teeming customers of its readiness  to  continue to operate in Nigeria despite recession and other challenges, South Africa Airways (SAA) has introduced a brand new A330—300 series  aircraft on the Lagos –Johannesburg.

This is just as the airline declared that come rain, come shine, it would continue to operate flights into Nigeria and that there is no plan to stop operations or reduce capacity.

This was disclosed by the Regional Manager, North, West and Central Africa, Mr Ohis Ehimiaghe, at media lunch announcing SAA new A330-300 aircraft on the Lagos-Johannesburg route in Lagos  today.

He explained that the state-of-the-art, environmentally friendly, super-comfortable aircraft would be deployed to the Lagos –Johannesburg route.

He said that the A330-300 aircraft deployed on the Lagos-Johannesburg route is one of the five new state of-the-arts, environmentally friendly, super-comfortable aircrafts that the airline has acquired to improve its service offering for passengers’ memorable journey.

He said  that with the A330-300 aircraft, Nigerian travellers will enjoy brand-new 46 Premium Business Class and 203 Economy Class seats with warm, neutral colours and cabin furnishings which provides a comfortable, elegant, hospitable and relaxed ambience, leaving travellers feeling well rested after long flights. He stated that the airline was still doing the documentation, configuration and other things that have to do with the aircraft, adding that all these takes a lot of time.

The brand new aircraft, he said will be deployed on the Lagos—Johannesburg route on December 11, 2016 to bring new travel experience to Nigerian travellers.

According to him, “We are delighted to introduce the aircraft on the Lagos—Johannesburg routes.”

The Regional Manager added that though it has been very tough for virtually all the airlines, adding that SAA will continue to operate in Nigeria despite the recession because the country has a lot of potential.

According to him, “It has been a tough time for practically all the airlines. South Africa Airways still believe in Nigeria routes; Lagos and Abuja.”

He continued, “We will not stop our operation into Nigeria and instead of stopping, we are introducing our best product into this market. When you buy a new aircraft, it smells different compared to the one that is not new. We want SAA guests to smell and feel the brand new aircraft. We have entrepreneurs, tourists and they deserved the best. That is why we are introducing the A330—300 series aircraft.”

On the challenges the airline is facing, Ehimiaghe listed regulated industry where airlines cannot take decision on their own, the inability to repatriate airline’s ticket sales to its home country, the problem of aviation fuel and infrastructural decay, He lamented that at a stage SAA like other airlines operating could not repatriate its ticket sales to South Africa due to scarcity of foreign Exchange.

Recalled that there was issue of insufficient forex situation that made the Federal Government to rational the available forex but this action denied international airlines including South Africa Airways from repatriating funds back home.

The Regional Manager added that airlines cannot repatriate except they apply to the Central Bank of Nigeria (CBN), adding that 90 per cent of the airline’s business is done in foreign currency.

He also said that the airline had to go to Ghana to buy aviation fuel, when the airline could not find any to buy in Nigeria.

On Abuja runway, Ehimiaghe said that the much talked about only runway in the airport has damage about four of its airplanes, and that one of the aircraft was in Abuja for eight days, adding that all these costs were taken care of by the airline.

Speaking on the infrastructural, the SAA Regional Manager stated that the facilities at the Murtala Muhammed Airport (MMA), Lagos has completely collapse, adding that any passenger that has passed through the airport will not have the best of experience, adding that apart from the numerous checks, the stress passing through the gateway airport is not encouraging.

He stated that Nigeria airports are the only airports in the world where luggage are checked physically, adding that at other climes luggage go through scanners.

Ehimiaghe added that if security agencies are now physically checking luggage, what happens to the scanning machine installed at the airport, he asked

Speaking on travel agency working with the airline, Ehimiaghe said that that the airline appreciated them in both in Lagos and Abuja, adding that those rewarded in Lagos includes: Wakanow, Flinch glow, Quantum and HRG and that they were awarded the platinum agency.

He said that in Abuja,Topaz was the airline’s Gold travel agency, adding that whatever the airline does in Lagos will be replicated in Abuja.

Be the first to comment on "SAA Vows To Remain On Nigeria Route Despite Recession, Other Challenges"