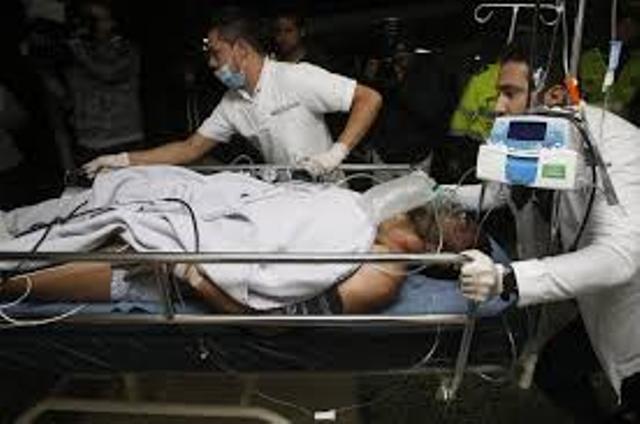 Among the five survivors are two members of a Brazilian soccer club; Chapecoense de Brasil as at the time of compiling this report

According to the New York Times,the team was traveling from Bolivia to play in the final of the Copa Sudamericana tournament when the plane crashed about 10 p.m. on Monday.

The aircraft was carrying 72 passengers and nine crew members.

A statement issued by the Medellín Airport the search was  hampered by low visibility and the rescue crews’ difficulty in reaching the site.

The authorities said the plane had reported electrical problems as it flew near the towns of La Ceja and La Unión in the mountainous stretches around Medellín. The South American Football Confederation said it had suspended the Copa Sudamericana, and the group’s president is heading to Medellín.

Players from the Chapecoense de Brasil soccer team on Thursday before the second leg of the Copa Sudamericana semifinal.

The Colombian station Blu Radio, citing an interview it conducted with, Colombia’s Civil Aviation Director, Alfredo Bocanegra ,said the plane had declared an emergency as it approached Medellín.

The plane was given priority to land before Air Traffic Controller(ATC) lost contact with it.

The Mayor of Medellín, Federico Gutiérrez told Blu Radio that “emergency support, with firefighters, ambulances and the hospital network,” had been activated.

Members of Chapecoense, a soccer club from the southern Brazilian city of Chapecó, were flying to Colombia for the first match of a two-leg final in the Copa Sudamericana, a second-tier championship for South American clubs.

That match, against Colombia’s Atlético Nacional, was scheduled for Wednesday in Medellín.

Chapecoense beat San Lorenzo ; the Argentine club that counts Pope Francis as a fan in the semifinals and clubs like Colombia’s Atlético Junior and Argentina’s Independiente along the way.

The club, founded in 1973, had in recent years clawed its way to what is effectively the top tier, and its play in Copa Sudamericana this tournament had been its high-water mark.