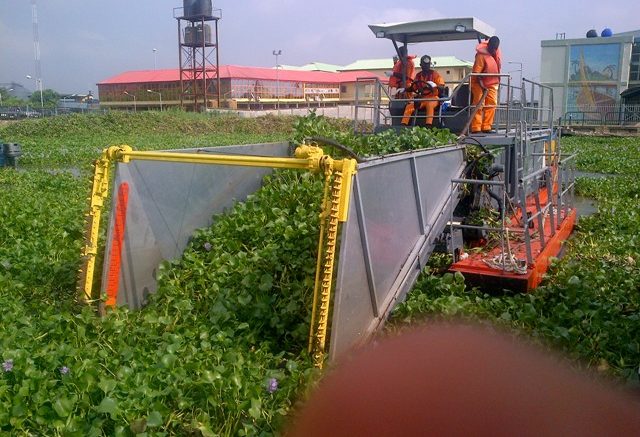 As part of efforts to ensure that waterways in Lagos State are smooth for water transportation, the state government has commenced the clearing of water hyacinth from jetties across the state beginning from Ebute and Sea Coach jetties.

This is just as boat operators lament the cost of operating their boats, as the migrating weeds takeover their jetties.

A visit to the two jetties; Ebute and Sea Coach Ferry Terminals showed that water hyacinth has taken over the jetties and boat operators lamenting that they now spend more compared to prior to the coming of the weeds.

At Ebute Jetty in Ikorodu, a private jetty managed by Association of Tourist Boat Operators and Water Transportation of Nigeria (ATBOWATON),a water hyacinth craft (also known as water hyacinth harvester)  for clearing  weeds from the waterways was seen batting to remove the weeds that have taken over the jetty from the terminal .A- 24 -seater modern boat with the inscription’, Lagos State Government emblem on it was also seen. Abelnewsng.com learnt that the 24 seater boat and Water Hyacinth Harvesting Equipment were facilitated by a rotary airlines based in Lagos.

The harvesting machine was seen removing the water hyacinth from the waterways so as to allow the boat operators  not only to do their business but to also avoid damage to the engines of the boats operating on the Ebute —Victoria Island route.

However, as the machine removes the weeds, the waterway where the weeds were cleared from is immediately taken over by the weeds, a situation which clearly shows that one machine is not enough for job.

Speaking to journalists at Ebute Jetty, the Chairman, Association of Tourist Boat Operators and Water Transportation of Nigeria (ATBOWATON), Mr Olayemi Aworitan stated that the association had serious challenge with water hyacinth, adding that the problem had been a recurring decimal.

He lamented that it has been a challenge for the boat operators, as it creates serious problem for them especially at night, adding that with the coming of this harvesting equipment, the association is happy but that the Lagos State Waterways Agency(LASWA) should provide more machines, as the only one working at the moment is not enough. He stated that because of the weeds that have occupied the jetty, the boat operators now spend 30 to 40 per cent of their revenue on operating cost.

According to him, “The challenge pose by water hyacinth is really affecting our operations especially at night. It can cause over heating to our engines.”

He disclosed that ATBOWATON has not receive any support or assistance from the government , adding that it cost N4.5 million, used engine also known in local parlance as Tokunbo goes for between N1.2 to N1.5 million  while a brand new engine cost N2 million.

On whether the boat operators have increased their fares as result of the extra cost spent on operation caused by water hyacinth, Aworitan said, “We have not transferred the cost on the passengers. We still charge them N600 from here to Victoria Island. We hardly make gains when water hyacinths take over the water ways.  Last year we spent N500,000 to prevent the weeds from coming into the jetty.”

On his part, the Chairman of Sea Coach Ferry Terminal, also in Ikorodu, Mr Bolaji Alaka, also corroborated Aworitan’s submission, adding that on Friday, November 25, 2015, two boats operating at the jetty recorded over- heating, adding that water hyacinth harbours a lot of debris, which comes with log, water sachets among others.

According to him, “Water hyacinth harbours a lot of debris and if the engine comes in contact with these debris, it is gone. It even affects single engine more compare to double engine boat.”

On what could be the worst situation, when an engine comes in contact with debris, he said, “The boat will be floating according to the direction of the water.

He also stated that last year the boat operators at the terminal spent millions to barricade the weeds from floating to the jetty, adding that within sometime, the water hyacinth turns to sand and that at this point it is much more dangerous.

He added that though the water hyacinth harvesting machine was brought in by Lagos State but that the equipment came rather late.

Also speaking, one of the Captains of the 24 seater boat, who spoke to abelnewsng.com on the condition of anonymity, stated that one water hyacinth harvesting machine could not clear the weeds from the waterways, adding that for the waterways to be effectively cleared it would require about 10 to 15 harvesting machines.

He added that after using the machine to clear the weeds, the Lagos State Waste Management Agency (LAWMA) will move the debris out from where they are dumped.

He added that the weeds also affects boat, as it causes overheating and that it also affects the impeller and gear box of the boat.

The driver stated that water hyacinth challenge was seasonal and that it usually come in October, November and December, adding that by march it would disappear