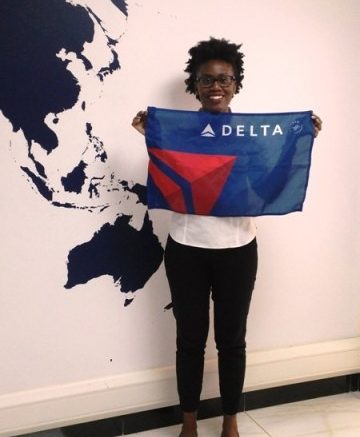 The scheme offers a 12-month contract to post-graduate students in Lagos, Nigeria, Accra, Ghana, Dakar, Senegal and Nairobi, Kenya, to gain hands-on knowledge and experience of working for a multi-national company.

The programme underscores Delta’s commitment to Africa, by helping young people from under privileged backgrounds acquire the skills they need to get ahead in business.

The interns work alongside the Delta sales team in each country, before attending a Delta conference in the Unites States.

Of the 19 people, who have completed the scheme, two are still employed at Delta while others have gone on to find managerial positions in a range of industries, become teachers or are furthering their studies.

According to the Delta’s Sales Manager for East and West Africa, Bobby Bryan, “It’s often difficult for graduates to get a break in the corporate world so offering opportunities like our intern programme can give them a real step up the ladder as well as learn about the complex nature of working for a global company.”

He continued, “Some of our past interns have gone on to gain executive jobs in the public and private sectors. I’m very proud of their achievements and am pleased Delta has been able to play a part in their success.”

Of the interns in Dakar, Donat Tending has gone on to work at the Spanish Embassy, while Arthur Mills, who interned in Delta’s Accra office from 2011-2012, now works as a Foreign Service Officer at the Ghanaian Ministry of Foreign Affairs.

Meanwhile, Mumbe Muthama from Nairobi was hired permanently by Delta.

According to a former intern and now Sales Executive in Nairobi, Mumbe Muthama, “When I started as an intern, I never thought I would have the opportunity to work for Delta after my contract ended.”

He continued, “I learnt a lot during the scheme, which has helped me in my career at Delta, such as relationship management, client servicing and sales promotion skills. I feel privileged and proud to still be here three years later.”

This December, Delta will celebrate 10 years of flying to Africa.

It also has sales offices in a number of additional markets, including Kenya and Uganda.