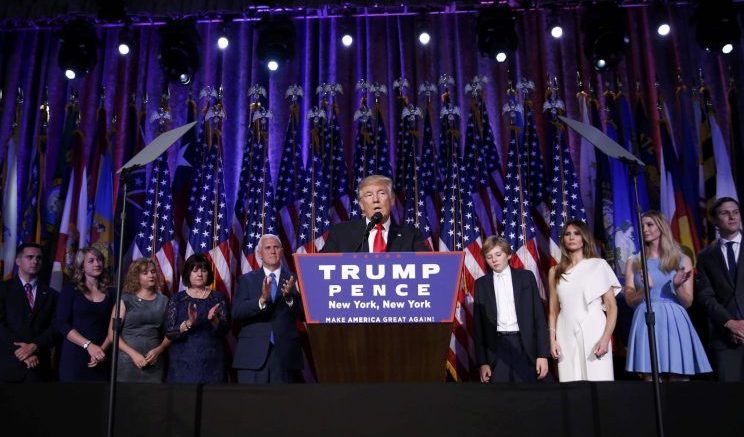 Hillary Clinton, Democrat Presidential candidate has called President Elect Donald Trump to congratulate him to be elected as the 45th president of the United States.

Trump will be will be the first person to hold the office despite having no prior political or military experience.

“It’s time for America to bind the wounds of division,” Trump, flanked by his family and his running mate, Mike Pence, told the crowd inside the Hilton hotel in midtown Manhattan. “To all Republicans, Democrats and independents across this nation: I say it is time for us to come together as one united people. It’s time.”

Trump’s victory over Hillary Clinton marks a stunning upset that neither the polls nor the pundits saw coming.

However, Trump, defiant to the end of the election, insisted he would win despite burning bridges with key voting groups and even many Republicans.

In winning, Trump upended almost every norm of American politics and apparently changed the shape of the Republican Party.

Clinton called Trump to concede the race shortly before he took the stage.

“I’ve just received a call from Secretary Clinton,” he said. “She congratulated us — it’s about us — on our victory. And I congratulated her and her family on a very, very hard-fought campaign. I mean, she fought very hard. Hillary has worked very long and very hard over a very long period of time, and we owe her a major debt of gratitude for her service to our country. And I mean that very sincerely.”

Trump spent the final three weeks of his once-unlikely White House bid railing against a “rigged” election, alleging without evidence that voter fraud would be widespread. He even hinted at the idea of not conceding the race if he lost, jokingly promising to accept the results of the election “if I win.”

But the brash billionaire also predicted that he would shock the establishment and said his campaign would be “Brexit Plus Plus,” a reference to Britain’s exit from the European Union, which also was not forecast in the polls. And in the end, to borrow one of Trump’s favorite expressions, he did indeed exceed expectations “big league.”

“They all told it wrong from day number one,” Michael Cohen, a longtime Trump adviser and Trump Organization attorney, told Yahoo News.

“America is going to see the change that it deeply needs and they’re going to have a leader a real leader,” Cohen added.

Trump spent the night huddled with family and friends, watching the returns inside the Hilton Hotel in Midtown Manhattan, where one Trump campaign source initially said some allies expected him to lose and were simply hoping he would outperform Mitt Romney’s showing in the 2012 presidential race. But as the night wore on, the Trump team became more optimistic and began to think the celebrity businessman had a chance, based on razor-thin margins in battleground states. After Ohio was called for Trump, the same source predicted that even the Democrats might also be changing their assessments of Trump’s chances.