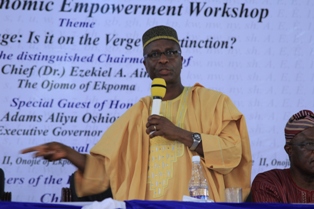 Welcome to the 12th Edition of the Esan Economic Empowerment Workshop (E3W), holding at Ogwa-home to Samuel Adegboyega University (SAU); a school which has dedicated a Centre for Economic Research and Development of Esan Land (CERDEL).

Our theme for this year is: Esan language: Is it on the Verge of Extinction?. Last year, at Igueben, we focused on Esan Cultural Values and Practices; and used the occasion to launch our two-year researched DVD documentary on Esan Cultural values and practices.

Language is a vital part of our existence and scholars have described it as the light of the mind and that it shapes thoughts and emotions and determines one’s perception of reality.

A leading linguist, Edward Sapir, in his book titled Language, published in 2014 by Sam Sloan, said:

“Language is not only a vehicle for the expression of thoughts, perception, sentiments, and values, characteristics of a community; it also represents a fundamental expression of social identity.”

There is a close relationship between the language and culture of a people. While ‘Culture’ is the totality of a people’s shared experiences, ‘Language’ is the principal means by which a people conduct its social lives. Members of a community do not only express their experiences, they also create experiences through their language.

Experts have stated that an endangered language is one that is at the risk of falling out of use as its speakers die out or shift to speaking another language.

Globally, it has been estimated that as many as half of the world 7000 languages are expected to be extinct by the end of this century. No thanks to globalisation and information technology, which have conspired to induce a new form of society-the network society.

In 2003, the United Nations Educational, Scientific and Cultural Organisation (UNESCO), produced an expert report which gave 9 indicators for assessing when a language is endangered. They are as follows:

If we subject the Esan language to the above language vitality indicators today, what would be the outcome? Your guess is as good as mine.

AEP is concerned that Esan language has become seriously endangered. All of us must act urgently to save Esan language. This has become more urgent especially now that there is a new wave of widespread surge of powerful expressions of collective identity that challenges globalisation, on behalf of cultural singularity and peoples control of their lives and environment.

REASONS WHY WE SHOULD BE CONCERNED ABOUT PRESERVING OUR LANGUAGE.

David Bradley and Maya Bradley in their book, Language Endangerment and Language Maintenance (2nd Edition, 2003), gave four unassailable reasons why we should be concerned about our language being endangered, and we could not agree more. They are as follows:

Semantic wise, Esan language is very rich in words of wisdom and knowledge. There are several meanings that Esan language can convey which English language cannot easily convey without losing the essence of the message. Examples abound in our proverbs and wise sayings.

On our part, our Association has taken several measures to promote and protect Esan language.

First, in our meetings, we do encourage our members to speak in Esan when making contributions to matters being discussed. The option to speak in Esan by a member who so desires, is written into our Constitution.

Third, at today’s event, the winners of the Esan language quiz competition which we have organized for students in Secondary schools in Esan land, would be given certificates and monetary prizes. We intend to make this an annual event.

Fourth, we believe that our collaboration with SAU will go a long way in promoting the development of Esan language. A Memorandum of Understanding which sets out the framework of the collaboration between the University and our Association will be signed.

We have taken bold steps towards the implementation of our Association’s Education Trust Fund objectives.

First, we have resolved to establish and maintain a standard library in each of the five local government areas headquarters in Esan land.

Second, AEP is in the process of establishing a Skill Acquisition Centre in Esan Land where we will train our youths on skills acquisition. There is also a short term project to partner with the Petroleum Training Institute Effurun, Warri, to train our youths in the acquisition of the requisite skills required in the oil and gas industry.

In line with our practice, we have decided this year, to recognize two of our prominent sons who have excelled in their chosen professions and have contributed significantly to the development of Esan land. The Esan worthy ambassadors, AEP has chosen this year, are Bishop (Dr.) Matthew Akhaze Okpebholo, Chairman/CEO of Ray Royal Construction Company Limited, Uromi; and Chief (Engineer) Patrick Inegbenigie Anegbe, KSM, Managing Director/CEO of Intercontinental Distillers Limited, Ota, Ogun State.

Ladies and gentlemen, once again, we welcome you all to this event, and look forward to your active contribution and support for the laudable projects we have embarked on, towards the development of Esan land.

Be the first to comment on "A Speech Delivered By the President of Association of Esan Professionals (AEP), Hon. Matthew Egbadon"