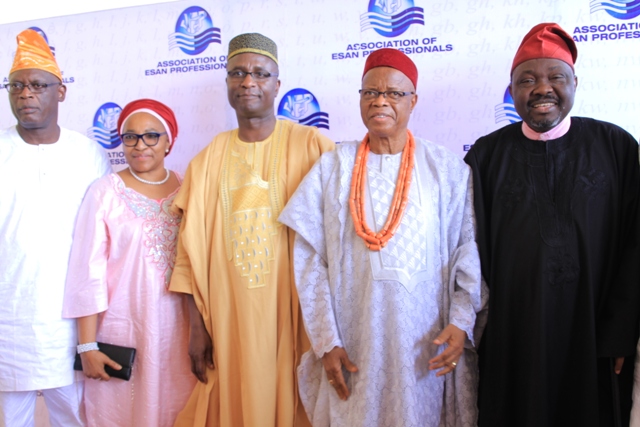 This is just as they advised parents to teach and speak Esan language to their children any point in time.

They made the call while speaking at the AEP 12th Esan Economic Empowerment Workshop with the theme, “Esan Language: Is it on the verge of Extinction? At Samuel Adegboyega University Hall, Ogwa, Edo State at the weekend.

Setting the ball rolling, the President of AEP and former Speaker of Edo State House of Assembly, Hon. Matthew Egbadon, said that the essence of the gathering is to brainstorm on the need to prevent Esan language from extinction, adding that the language was fast dying, as parents no longer speak Esan to their children and that even children whose parents are all Esan don’t speak the language to their wards. * The Onojie of Ogwa , His Royal Highness, Zaiki Victor Agbomere Ehizojie 11 (5th from left) and the President of AEP and former Speaker of Edo State House of Assembly, Hon. Matthew Egbadon(6th from left) with other AEP Exco Members during a courtesy visit to the monarch;s palace in Ogwa

He stated that AEP was trying to prevent a situation where as time goes on Esan language will no longer spoken by Esan children, adding that what the group is demanding is for Esan language to be taught in schools .

He added that as it is today Esan language is endangered and that if drastic steps were not taken to address the issue, the language may become extinct in the next 25 years.

The former Speaker of Edo State, House Assembly, stated that the gathering at Ogwa was to find a way to salvage the language.

According to him, “If you don’t understand Ishan language, there is no way you will understand the culture itself.” * The Representative of the Onojie of Ekpoma, Chief Steve Omofuma(6th from left) and the President of AEP, Hon. Matthew Egbadon in a group photograph shortly after paying courtesy call on the monarch .

The former law maker posited that during his primary school days, he was taught Esan language but that today the language is no longer taught in schools and that this further makes the language to extinct faster.

In his words, “We want Esan language re-introduced in schools’ curriculum. We intend to reach out to our people abroad on this matter. It is a very serious one. We have come to seek support and prayers of every Esan man and woman.”

Speaker of the Edo State of Assembly, Rt. Hon. Dr Justin Okonoboh, stated Esan language cannot go into extinction, adding that the fear of language going into extinction was not restricted, as even the French and English people also entertain this fear. He stated that the Oba of Benin, Oba Ewuare 11, had also called for the inclusion of Edo language and history in schools’ curriculum during his coronation and receipt of staff of office.

The Speaker added that the Oba had implored government to include Edo language and Benin history in schools’ curriculum, assuring that he would ensure that Esan language does not go into extinction.

According to him, “I know we can prevent Esan language from dying with the caliber of people in AEP in particular  and Esan in general”

The  Chairman of the occasion and the Ojomon of Ekpoma , Chief Ezikiel Ainabe, stated that the fear of Esan language going into extinction was real, adding that presently children from Esan land no longer speak the language .

He said that the very aim of this gathering organised by AEP is to discuss and proffer solutions on how best to revive Esan speaking of Esan language.

According to him, “It is high time we address this issue of Esan language going into extinction once and for all. That is the reason why we are here to draw the attention of Esan people to the danger of allowing the language to die.

He stated that the AEP would put pressure on authority to ensure that the language is not only spoken but that it is also taught in schools, adding it would not be out of place if it is made a compulsory in schools

On the way forward, the Chairman stated that the association would ensure that Esan language is made compulsory in schools in Esan land.

To buttress his point, the Chairman stated that AEP organised a quiz competition for students from the local governments in the state to encourage them to speak Esan.

Also speaking, the traditional ruler of Ekpoma, His Royal Highness, the Onojie of Ekpoma, Ehizojie Abumere Anthony 11, who commended AEP for the bringing the issue to the fore added that when he heard that the group was coming to his palace ,he decided to wait because the issue the association was coming to talk on also gives him source of concern.

According to him, “I have been thinking of what you are doing about Esan language that is fast dying and no longer taught in schools. The issue should give any real Ishan man concern.”

He pointed out that two things that are giving him serious concerns include: firstly, that the voice of Esan people is no longer heard or vociferous and that secondly, that Esan history is no longer taught in schools.

In his words, “Any man that does not speak his father’s language is a slave. It is a new pattern of slavery.”

On the way forward, the Onojie of Ekpoma advised AEP to first and foremost take the issue of bringing back Esan language into schools’ curriculum with the Ministry of Education, adding that that is where the problem started from.

He also advised the group to carry along the Nigeria Union of Teachers (NUT) Esan Chapter, as according to him the chapter is made up of Esan speaking men and women.

On his part, the Onojie of Ogwa , His Royal Highness, Zaiki Victor Agbomere Ehizojie 11 re-echoed the words of the Onogie of Ekpoma but decried a situation where despite the fact that both parents are Esan, yet  the children cannot speak Esan language.

He argued that a situation where children abandon Esan language and speak other language amounts to backward civilisation, adding that the issues raised by ARP are worth discussing.

The traditional ruler stated that if care was not taken, the language may die in the next 25 years, adding that culture is not all about language but that it also includes dance.

He said that of all the dances by Esan people only the Igbabonelimin that is still very popular till date, but that despite that it is very difficult to find Esan youths learning how to dance Igbabonelimin

He listed some of the Esan dances that are fast go into extinction to include Asolo and others.

According to him, “Even if we were brought up and stay in Lagos, we must learn to speak Esan language”

He thanked AEP for making efforts at reintroducing Esan language in schools curriculum, adding that by the grace of God efforts of the group will not be in vain.

We should support those promoting Esan culture .We thank those of you for the efforts at reviving the teaching of Esan language in schools”

Contributing to the discussion, the Chairman, Planning Committee, Prof.  Michael Ikhariale said that the association as part of efforts to ensue Esan language does not die has appealed to the university to establish a department of Esan language and culture in the university.

Be the first to comment on "Professionals, Monarchs Cry Out Over Possible Extinction Of Esan Language"