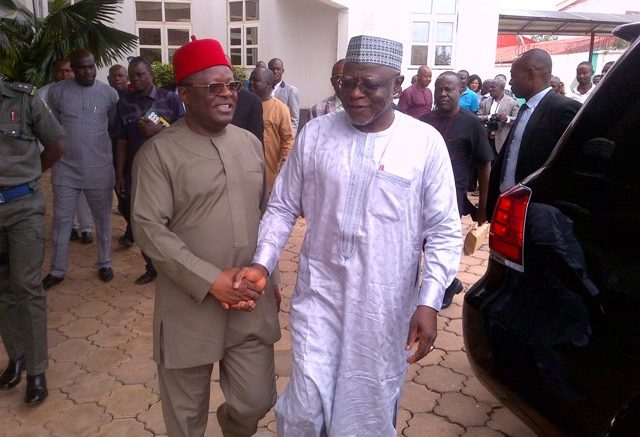 The NDLEA boss during an advocacy visit to Governor David Umahi of Ebonyi State and Chief Willie Obiano of Anambra State said that it is important to form strategic alliance with governors who are the chief security officers at the States.

Abdallah had a closed door meeting with Governor David Umahi at the Ebonyi State House at the weekend over proactive measures aimed at preventing illicit drug production in the State.

The focus of the meeting was on drug prevention particularly the control of illegal methamphetamine production laboratories as well as how to prevent youths from engaging in drug trafficking.

Governor Dave Umahi said that he had fruitful discussion with Muhammad Abdallah on how to prevent drug production and promote peace in Ebonyi.

He also pledged to assist the State command of the NDLEA with operational logistics for optimum performance.

Recalled that the NDLEA had discovered 11 methamphetamine laboratories in the country between 2011 and June 2016.

Of the 11 discovered, five of the laboratories were detected in Lagos, another five in Anambra and one in Asaba, Delta State.

The last laboratory discovered in Asaba is the largest and four Mexicans are among those arrested and currently being prosecuted by the agency.

While in Awka, the NDLEA Chairman thanked the Obiano for partnering with the agency in the fight against drug trafficking.

In his words, “I am happy to commence my official State visit with Anambra. This is because of the priceless support the agency is getting from the State. The state has assisted the command with vehicles, accommodation and the right environment to win the war against drugs. The agency will continue to work very hard in dislodging drug trafficking organisations in the state.”

The Chairman also commended the governor for providing the command with a parcel of land for the construction of a drug rehabilitation centre in the state capital, as well as sponsorship of anti-drug abuse education in schools and media.

Be the first to comment on "NDLEA Boss Takes Drug Campaign To Ebonyi, Anambra"