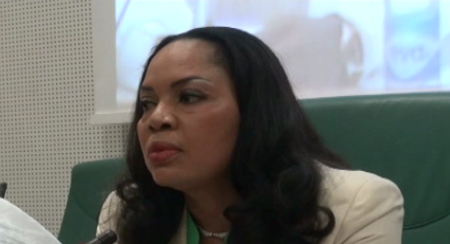 …As Committee Frowns At Pace Of Work

…NCAA Canvasses For Aviation To Be Given Priority In Allocating Forex

Indications emerged Wednesday that the international terminal at the Murtala Muhammed Airport (MMA), Lagos under construction by Chinese Civil Engineering Construction Company (CCECC) will not be delivered to the Federal Government in December, 2016 as revealed to the House Committee on Aviation by the contractor.

The Committee disclosed this through its Chairman, Mrs Nkeiruka Onyejeocha while speaking to journalists shortly after the committee carried out oversight function on some facilities at the Murtala Muhammed Airport (MMA), Lagos today.

The Chairman, who decried the pace of work on the terminal project, told  aviation correspondents that the contractor said that he would not be able to meet the deadline of December, 2016,

She stated that with the snail speed at which the project was  going on, she doubt if the contractor would be able deliver the project to the Federal Government in December 2016 as earlier planned ,wondering why the construction should be slow when there is an agreement to that effect.

According to her, ‘They said they won’t be able to deliver by December but I them know that they should understand that we took loan to build this and the Chinese government is not going to wait for us because agreements have been signed. So the repayment period would start when it would start unless they go back to drawing board to renegotiate and you know we have three other terminals that we are hopeful would be delivered by December and so what it simply means is that Lagos is lagging behind and we would take it seriously.”

Onyejeocha stated that the committee would look into the planned concession by organising public hearing for stakeholders, which include airline operators, agencies, unions and the media

He added that the essence of the public is to hear from all the stakeholders in the industry, adding that on her personal opinion she does not think concession is the best solution considering the fact that the four airports to be concessioned are the ones feeding other 18 other airports in the country.

According to the Onyejeocha, ”I am one person who don’t believe that we should concession the four major airports that we have because I know it is those four airports that are funding the other 18 international airports and of course you have to look at the issue of workers and of course the Nigerian people as a whole. If we concession them and people are going to make money and be okay, why can’t we do it?

Meanwhile, the Director General of the Nigerian Civil Aviation Authority (NCAA),Capt Usman Muhtar  has appealed to the  House Committee on Aviation to enact a law that will enable the aviation industry to  access foreign exchange from the Central Bank of Nigeria(CBN).

He made the appeal when the committee led by its Chairman, Nkiruka   Onyejeocha visited the agency yesterday at NCAA headquarter at the Murtala Muhammed Airport (MMA), Lagos.

The NCAA posited that one of the major problem of the airline operating in the country is the non availability of Foreign Exchange(Forex) for airlines to carry out maintenance and for the industry to carry out training of its personnel.

He pointed out that both maintenance of airlines’ airplanes and training of personnel are Forex denominated, soliciting that aviation should be given priority in the allocation of Forex.

The NCAA boss posited that when the domestic airlines are considered in the allocation of Forex it would further make it easier for NCAA to maintain standard.

On the outcome of the meeting between the industry and the CBN, the DG said that they were able to get free duty on aircraft and spares and that the foreign  airlines were also allowed to get 50 per cent of their Forex for their operations, adding that NCAA will continue to do to ensure that airline operators remain business.

However, the Committee asked NCAA to strengthen the economic regulation of the agency to further improve safety of domestic airlines in the country.

It also asked the NCAA to look at the corporate governance of domestic airlines, their structure and ownership, adding the ‘Na Me get am” attitude of these airlines is affecting their operations.

Be the first to comment on "Lagos Int’l Terminal: December 2016 Completion Date Not Feasible –CCECC"