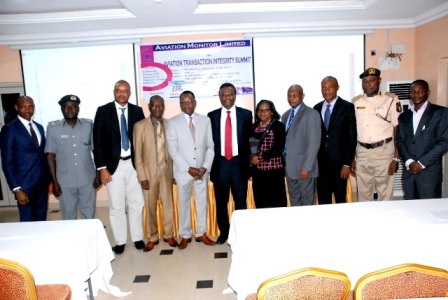 Stakeholders at the 1st Aviation Transaction Integrity Summit organised recently by Aviation Monitor Limited have said that, “Unless stakeholders in Nigeria’s aviation sector begin to ensure integrity in their transactions, the sector may never experience the desired speedy growth and development.”

This was one of the resolutions in the communiqué issued at the end of the event at Golfview Hotel, Lagos, with the theme, Enhancing Transaction Integrity In Nigeria’s Aviation Industry.

In his keynote speech, Alhaji Adamu Abdullahi, who represented both the Honourable Minister of State, Aviation, Senator Hadi Sirika and the Director General of Nigerian Civil Aviation Authority (NCAA), charged service providers and airlines to “remember that starting or running a business with the sole purpose of making money is not the only objective, but a deliberate effort to make honour and integrity the hallmark. Enhancing transaction integrity in business cannot be equated with anything else. When a company is known for its transparency and integrity in business, it increases its chances to grow, make huge profits and have a loyal customer base.”

Presenting a paper titled, “The Importance of Transaction Integrity in Aviation Policy Formulation & Implementation, the Chief Executive Officer of Belujane Konzult Limited, Mr. Chris Aligbe, stated that any policy formulated for the public good without consulting the public or stakeholders is not in the interest of the public.

He emphasised the need for the NCAA to be fully involved in the process of airport concession if government actually had the intention, adding that “NCAA staff should be trained on how to regulate airports under a concession arrangement before the concession exercise starts.”

In his speech, the Publisher of Aviation Monitor Limited, organiser of the event, Mr. Albinus Chiedu, said the summit was convened “to evaluate the level of integrity in business transactions, interactions, agreements and contracts implementation as well as respect for laws and morality in various dealings that occur in Nigeria’s aviation industry.”

According to him, “the growth and development of Nigeria’s aviation sector has been challenged by issues of transaction integrity. For instance, duly signed contracts and agreements between parties have featured controversies at the middle of implementation over what the agreement originally was. Indebted service consumers have had to argue with service providers over how much was being owed, despite existing documentation processes. There are some consumer protection and customer relations cases, where the service provider deliberately refuses to live up to expectation as required by law and morality. The issue of unclear employment status and contract staffing under the guise of outsourcing in organisations, as well as setting up of airlines that lack sound business models, are no less transaction integrity issues.”

Contributing at the panel discussion session, the President of Association of Foreign Airlines Representatives of Nigeria (AFARN), Mr. Kingsley Nwokoma noted that stakeholders’ calls for expansion of the apron at the Lagos international airport for over 20 years so as to have enough aircraft parking space, had not been yielded to.

The former Director General of NCAA, Dr. Harold Demuren revealed that contract was awarded for expansion of the Murtala Muhammed International Airport (MMIA), Lagos apron while the contractor was paid, but that the job was never done.

“There is a need for constant engagement with stakeholders to enhance integrity in the industry. Also, we must do away with undue political interference and enthrone good corporate governance. Every stakeholder needs to exhibit integrity. Even passengers need to exhibit discipline and not abuse hotel privileges in cases of flights cancellations, where airlines have to book hotels for them,” he said.

Demuren, who moderated the panel session, further called for a change in approach to engagements between workers’ unions and organisations.

In his remark, the Chairman of National Association of Government Approved Freight Forwarders (NAGAFF), Dr. Segun Musa appealed to aviation authorities to avoid offering of undue advantages to some operators in the cargo sub-sector, which he said, encourages deliberate breach of standards by others who feel there is no integrity in the system.

He queried the restriction of number of licensed ground handling companies in Nigeria to two, calling for a comprehensive transport policy in the country in order to address integrity issues.

On her part, Director of Legal Services, Nigerian Airspace Management Agency (NAMA), Mrs. Anastatia Gbem said “Working within the framework of the law is key. For instance, taking the 5% ticket sales that belongs to government agency and putting it in your business is bad practice. There is so much impunity in the system because of lack of integrity. So, attitudes to business must improve for industry to grow.”

Chairman of the occasion and President of Aviation Round Table, Mr. Gbenga Olowo submitted that to achieve integrity in the system, there was a need for an upward review of airline fares to a more appropriate fare, considering the rate of inflation over the years, which air fares had not responded to.

In his own submission at the panel, the chairman of Airline Operators of Nigeria (AON), Capt. Nogie Megisson, who was represented by Mr. Ewos Iroro explained that there was no way the domestic airlines in Nigeria would survive with the existence of too many charges from both within and outside the sector, requesting that airlines should be involved in policy making processes from design point.

“Every minute an airline stays on ground is an additional cost. When one flight is delayed for 30 minutes, it affects the airline’s chain of operations at various locations. Yet, the airline cannot charge the passengers any extra cost,” he explained.