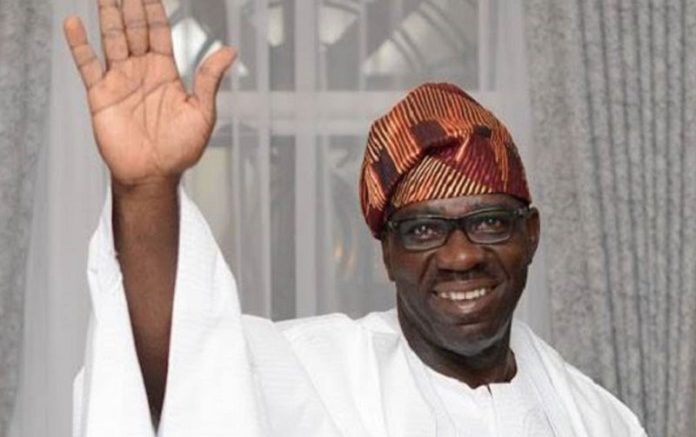 …As Governor – Elect Promises To Continue With Oshiomhole Developmental Strides

Benin City, the Edo state capital and major towns in the state was agog shortly after the Independent National Electoral Commission (INEC), declared the candidate of the All Progressives Congress (APC), Mr Godwin Nogheghase Obaseki, winner of the just concluded governorship election in Edo state.

This is just as President Muhammadu Buhari congratulated the government and people of Edo State on the successful conclusion of the governorship election and the victory of the APC candidate, Obaseki.

The APC candidate Obaseki scored 319,483 to defeat his his closest rival, the candidate of the Peoples Democratic Party (PDP), Pastor Osagie Ize-Iyamu, who polled 253,173

The candidate of the All Progressives Grand Alliance (APGA), Osaro Onaiwu who came a distant third in the just concluded election scored 876 votes.

Reacting to the victory, Obaseki the governor elect said that he gives glory to Almighty God, just as he assured that he would continue with the developmental started by Comrade Governor Adams Oshiomhole.

Other LGAs, where Obaseki won are: Igueben in Edo Central and the six in Edo North, Governor Adams Oshiomhole’s domain.

The Returning Officer Prof. Kayode Soremekun, who is also the Vice Chancellor of the Federal University, Ikere Ekiti state,said that that APC Governorship candidate, Obaseki haven won the highest number of votes is hereby declared the winner and returned elected”.

Meanwhile, President Muhammadu Buhari today congratulated the government and people of Edo State on the successful conclusion of the governorship election and the victory of the All Progressives Congress (APC) candidate, Godwin Nogheghase Obaseki.

In a statement by the Special Adviser on Media and Publicity, Femi Adesina, the President stated that the outcome of the election clearly reflected the mood of the people to sustain the pedigree of responsiveness, forthrightness and diligence that Governor Oshomole brought into the service of his people.

According to him, ‘‘The victory is good for democracy, for Nigeria and the people of Edo State.”

The President added that the APC candidate’s victory was well-deserved, adding that the campaign train, which he joined, worked hard to sell its people-centered manifesto.

He commended INEC, security agencies, corps members and electorate for ensuring a peaceful election in the state.

However, while APC supporter in the state were jubilating and celebrating the victory at the just ended governorship election, the PDP supporters on the hand protested to INEC office in Benin but they were driven back by APC supporters, who outnumbered the aggrieved PDP supporters.

An eyewitness, told Abelnews that the PDP supporters were overwhelmed by the APC supporters, who were chanting victory songs,