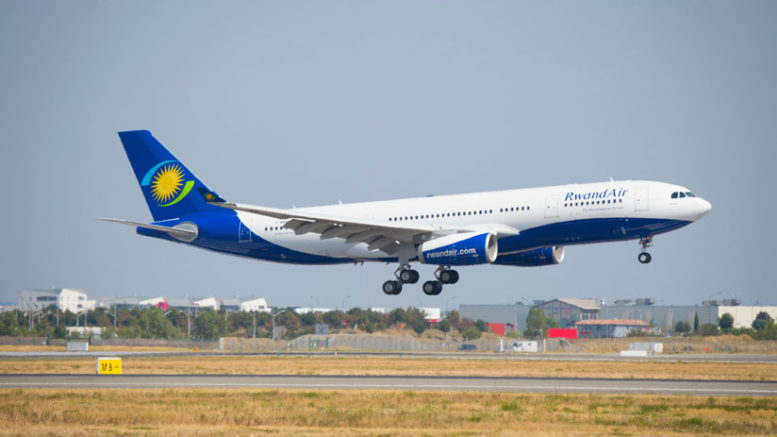 The waiter is over. National carrier RwandAir has officially laid claim to a brand new Airbus 330-200, proudly nicknamed ‘Ubumwe’;unity.

The aircraft is the first of its kind in East Africa and will help boost RwandAir’s capacity to expand its wings globally, the airline’s Chief Executive, John Mirenge told ‘The New Times’ in Toulouse, France, yesterday.

The aircraft, with a capacity of 244 passengers, is expected to touch down at Kigali International Airport at exactly 11am today, with more than 80 passengers on board.

Mirenge said the new wide body aircraft is the biggest milestone for Africa’s fastest growing airline and opens up opportunities in terms of expanding the airline’s footprint.

“We are now set to compete globally,” Mirenge said, adding that the airline has been growing at an average of 20 per cent in the last six years and is currently positioning itself as the most efficient and reliable airline in the region.

The new aircraft, worth about $250 million (about Rwf200 billion) brings the airline’s total fleet to nine with additional four planes expected to be delivered by end of February next year.

The aircraft is expected to be deployed on the Dubai route.

A  second Airbus 330-300 is due for delivery in November and, according to aviation experts, the acquisition of these two wide-body aircraft will significantly increase RwandAir’s capacity to effectively meet growing demand and provide exceptional service quality for the ever-growing Asia-China and European passenger markets.

RwandAir will soon add Harare (Zimbabwe), Mumbai (India), and Guangzhou in China on its list of destinations before expanding to Western Europe.

The A330 type of aircraft has an operational reliability of 99.4 per cent and boasts efficiency for all market segments, thus making it a perfect match for RwandAir, Corrin Higgs, the Airbus interior marketing director, said.

The new aircraft means the airline can now expand its flight coverage to both Europe and East Asia in the near future. * Mirenge (2nd right) and Amb. Kabale (2nd left) with Airbus officials after the hand-over of the Airbus A330-200 in Toulouse, France. / Peterson Tumwebaze.

“We are proud of the visionary leadership of the Government of Rwanda and RwandAir’s efforts to contribute to the continent’s aviation industry,” he said.

“The new aircraft reaffirms the confidence between RwandAir and Airbus and we will continue to stand side by side with the airline to ensure it realises its full potential,” he added.

Akoum said the manufacturer will equally assist in the training of the airline’s technical engineers and pilots to ensure efficiency and safety.

Rwanda’s Ambassador to France, Jacques Kabale said the aircraft means more efficiency in terms of movement, which will increase connectivity and will link Rwanda to the rest of the rest of the world.

In 2014, RwandAir and the Eastern and Southern Africa Bank (PTA Bank) signed a financial line of credit, worth $160 million, to support the purchase of the two airliners.

The plane will have its first commercial flight to Dubai later this week, officials said.

The national carrier successfully renewed its certificate for the IATA Operational Safety Audit (IOSA) for another two years to remain competitive.

IOSA programme is an internationally recognised evaluation system designed to assess the operational management and control systems of airlines.

And there is hope that with two wide body aircraft, the airline’s capacity could grow from the current 500,000 passengers annually to more than three million in the next five years.