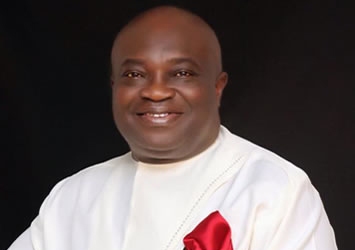 Governor Okezie Ikpeazu of Abia State may have to contend with another political battle, this time from within his Executive Council Chambers as some of his trusted aides may frustrate his dream of creating a new revenue life-line for the state through a model Internally Generated Revenue (IGR) mechanism.

To add meat and justify wisdom behind the bifurcation of several revenue yielding ministries and departments, Red Stick Integrated Services powered by the Ministry of Environment and Solid Minerals bided, paid and provided revenue and job creation blue print which leap frogged the state’s revenue for the sector from N1.5million under the old Ministry of Petroleum to a N100million in the now threatened new dispensation, a development that may hinder the flow of investment and investors, particularly Abians in Diaspora whom the governor has assured of stress free investment enabling environment in Abia State.

The Abia chief servant, who has refused to be distracted by the endless election court cases, had late last year constituted an economic think tank to come up with modalities to drive his vision to arrest the poor investment outlook of the state which he intends to reposition as south east’s prime investment destination.

Gov. Ikpeazu’s dream is already in jeopardy despite directives from the Head of Service(HoS) of Abia State Dr. Vivian Uma to affected ministries to revert to the recommendation of the bifurcation committee and in this case to the ceding and marriage of the Ministry of Environment and Solid Minerals from Ministry of Petroleum.

In a memo HSA/S 0094/11/9 dated January 25th this year, Dr. Uma had stated that the governor has approved the report of the bifurcation committee and advised the commissioners affected and in this case, the Commissioners of Petroleum and Environment and Solid Minerals to take necessary steps to implement the recommendation.

While the Commissioner of Environment and Solid Minerals, Barrister Gabe Igboko went to town to attract investors, his counterpart in the Ministry of Petroleum allegedly threw brick bats into the market place to frustrate the governor’s revenue agenda, apparently not happy with the Bifurcation Committee report, which ceded the solid minerals away from his ministry to Igboko environment mandate.

A top civil servant in the state told Cables in Umuahia, Abia state that open disregard and administrative indiscipline to the governor’s directive cuts across almost all the ministries and agencies, most which want the status quo to continue to the detriment of Abia’s economic revival.

A Chief Consultant to the State on Revenue Generation, Dr. Abel Ekpunobi told us that the development is very unfortunate but noted that the governor’s dream to rebuild the state on all frontiers through new revenue generation lines cannot be hindered.

“I think it is a process that would take some time to sink in” Dr. Ekpunobi explained in attempt to drive home the reality and arrival of the new ways to run government business.

“There is nothing to panic about if you know the stuff governor Ikpeazu is made of, so Abia new model on revenue generation and this includes the repositioning of Aba as the epi-centre of south east, south-south business frontier is not up for negotiation and cannot be frustrated” he added, nothing “RedStick Services has exposed the lie behind poor revenue lines from the old order and today, the Ministry of Environment and Solid Minerals can confidently take steps to open other frontiers of employment and investment portfolio as it did with RedStick as revenue collectors on solid minerals”.

Managing Director, RedStick, the government approved revenue collector on solid minerals, Dr. Chuma Igbokwe told Cables that the development particularly the disparaging of his company reputation is hard to swallow.

He said, “we came into the state not only to collect and improve on the revenue line but also to create bankable data and employment for youths in stakeholder communities, but despite our contribution in less than three months in the state, some people have gone ahead daily to harass my staff and project us as fraud in the discharge of our mandate.

Asked if he would pull his company out of the deal, Dr. Igbokwe who lived in the UK but returned to Nigeria to help out, disclosed that he is weighing his options but believes the governor and the Commissioner of Environment and Solid Minerals would soon sort out the matter amicably.

Several attempts to reach the Commissioner for Petroleum was futile, at least to clear issues on a recent demand notice to sand dealers association in Ukwa west local government area of the state signed by him and dated August 23, this year to the effect that stakeholders should    pay to another revenue collection company, Ley and Frank  limited, attaching a copy of the state law no 3 of 2016 and the state excavation and quarry sites inspection registrations, loading and maintenance law 2016 as claim to the ministry’s right to supervise solid minerals sector as against the new directive from Abia State HoS, Dr. Uma, conveying the governor bifurcation approval.

Commissioner for Environment and Solid Minerals, Gabe Igboko told Cables in his office in Umuahia that the governor’s wisdom to move the solid minerals department to Environment cannot be faulted in view of new thinking and the administration’s determination to give a Abia a new lease of life.

“As aides of the governor, we must be seen to channel our energies to the general good of our state and the satisfaction of the governors wish and mandate, so the bifurcation of the ministries cannot be faulted and we have the instruction and directive to arrest any intruder to his Excellency’s directive in this regard, adding” we have done our job and got a credible company, managed by an experienced Nigerian, Dr. Chuma Igbokwe to drive the initiative which has apart from generating a new revenue base line from solid minerals but also created jobs for youths from stakeholder communities in the state” Igboko emphasised.

Abia, an oil producing state and former centre of high wire economic activity in Nigeria, had seen its revenue allocation from the centre drop drastically, its Aba city economic melting pot broken to pieces due to years of neglect and politics of power generation which dealt a harsh blow to small scale business enterprises which were the pillars of Abia’s economic frontier.

However, observers of this ugly development wonder why Governor Ikpeazu has not sanctioned the fifth columnists in his government despite their seeming disregard to his directives on the bifurcation report. Will this action make other investors from the Diaspora put a hold to their investment in Abia under Ikpeazu? Only time will tell.