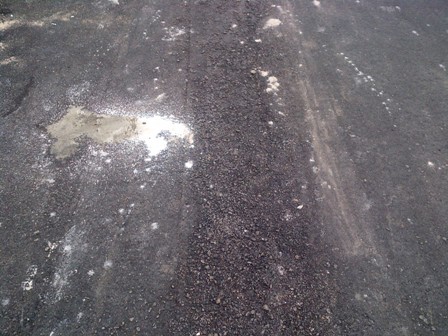 A rough portion of the newly Constructed Kalejaye Road In Mafoluku

…Says The Road May Collapse Soon

Residents living along the newly constructed 736 metres Road at Kalejaye in Mafoluku area of Lagos have appealed to  the Lagos State Governor, Akinwunmi Ambode not to commission the road, as it was  poorly  constructed by the contractor; Jumbo Engineering Limited.

They argued that commissioning the Kalejaye road project would amount to a waste of scarce resources especially during recession.

The  residents’ said they are asking Ambode not commission the road project they learnt that the Lagos State governor plans to commission newly built 114 roads across the state.

The residents, who complained to Abelnews, stated that the road was poorly and shoddily done and that it would collapse anytime there is heavy rain, despite the government allegedly spending N1. 3billion on the project

Abelnews gathered that the project is scheduled for commissioning on Saturday, September 24, 2016, but it is not however clear if the governor will do the commissioning.

The online news platform also learnt that the contractor use watering can to spay water on the road during construction.

The contract, which  was awarded to a local contractor; Jumbo Engineering Limited is one of the 114 road projects the State Government hope to commission this month and has gulp a total of N19.4 billion.

The residents further complained that the road, which serves as both exit and entry point to the gateway airport; Murtala Muhammed Airport (MMA), Lagos, was not properly constructed, adding that though they are not engineers, the present state of the road showed that it was a badly constructed road by the contractor.

The residents Abelnews learnt are worried because the road may not last long before it collapse, appealing to  governor Ambode not to commission the road, as it amount to commissioning a substandard road .

Speaking to journalists, the Commissioner for Local Government and Chieftaincy Affairs, Hon. Muslim Folami, shortly after inspecting the road, said that as far road construction was concerned he is a layman, but that despite that fact he was satisfied with what he has seen.

The Commissioner denied the insinuations making the round in some quarters that the State Government spent N1.3 billion on the construction of the contentious road alone, insisting that the government spent N19.4 billion in constructing 114 roads, two in each Local Government Area and Local Council Development Areas.

According to him,  “As a layman, I can tell you that I’m a little satisfied with what I have seen, but all areas that need corrections would be corrected before Saturday when we will come for the commissioning. I’m in the Ministry of Local Government and Chieftaincy titles, so, I don’t know much about road construction.”

“The allegation of N1.3 billion is a false. In fact, the entire 114 roads that are being constructed by the government is N19.4 billion. However, I can assure you that all the corrections would be done before Saturday”  he assured. Another badly constructed portion of the road

On his part, the Contractor handling the road project, Mr. Sadiq Oluwaseyi, stated that he was satisfied with what the quality of work despite the barrage of complaints and criticism by residents and those using the road to connect the airport.

According to him, “I am very satisfied with whatever we have done. It is not the contractor’s responsibility to do a walkway for individuals’ houses, but we are doing this for them with our own resources.”

He denied using watering cans to spray water on the road, adding that there is no iota of truth in the allegation.

Asked to assess himself, he said, “I can score myself 110 per cent on this job.”

A resident, Mr. Adewale Olakunmi, lamented that the road was poorly constructed by Jumbo Engineering Limited and that Lagos State Government should not have given such an important project linking Lagos Airport to a contractor without track record.

According to him, “By the time trailers, tankers and trucks starts only God knows what will become of this road. It is a shame.”

On her part, Mrs. Elizabeth Amokwu, a landlady in the area also lamented the quality of jobs done on the road, observing that just few days to commissioning water was already gathering at some points, a situation which further showed that the road was badly constructed.

In her words, “What sort of job is this? Our problem in this country is that we give out jobs or contracts based on man-know-man basis. What is the antecedent of the company that handled this job? Look at the quality of job he’s delivering to the government this Saturday; a very poor work.”

“Look at the holes created for flood to exit the road very rough, some parts of the road are smooth, while cracks are already obvious in some parts. How many years is this road going to last before it collapse.” She asked.

To further buttress the point, that the residents were not happy with the shoddy job done by the contractor, Abelnews overhead some of the residents discussing the matter in twos and threes and blaming the Lagos State government for awarding the contract to a contractor, who they alleged does not have equipment to work with.

Abelnews observed that when the residents noticed that journalists were around, they appealed to them to help the residents to inform governor Ambode that the job was not properly done.

“This is not a good job at all. The governor should have come to inspect the road so that he can see things himself,” One of the angry residents lamented.