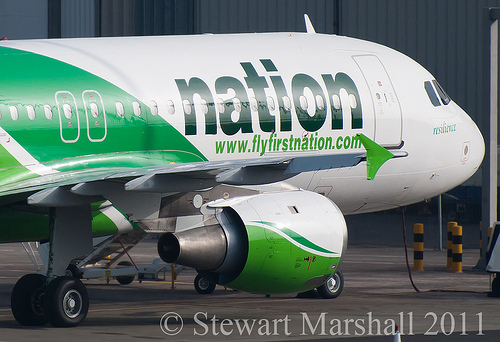 ,,,Says It Experienced Strong Passenger Demand Despite The Break

An online statement signed by an official of the airline from the Corporate Affairs,Rasheed Yusuff  and made available to journalists said, “We are delighted to inform you that our operation is back.  Flight commenced on Sunday, September  18,  2016  with  very  strong  passenger  demand  despite  the  break. This patronage reinforces the strength of our brand and the quality of our service.  We received ground  swell  of  support  from  the  flying  public  during  our  maintenance  break  and  this tremendous support has been humbling experience to all of us at Firstnation.”

The statement added that since  the airline launched flight operations  in 2013, it has  built a respectable followership and rated  consistently  as  market  leader  on  safety  standard  and  schedule  integrity  on  the routes that we serve.

The achievement of IOSA certification by Firstnation in 12 months of application, the statement ,aid remains unrivaled in West and Central Africa.

“The Airline reaffirms its commitment to her flight operations and remains bullish about  Nigeria’s economic outlook and her operations.  We are currently working on expanding  our fleet as well” The statement further reads.

Abelnews recalled that    Firstnation suspended operations on September 2,2016 barely 24 hours after the oldest domestic airline in the country ;Aero shut down its fixed wing operations.

The airline continued,  “This will ensure that passengers continue to enjoy safe and reliable service that the airline is reputed for. Current foreign exchange constraint, coupled with over 70 percent devaluation of Naira partly contributed in no small measure to the development. The airline’s plan remains on track to reinstating service as advised herein.”