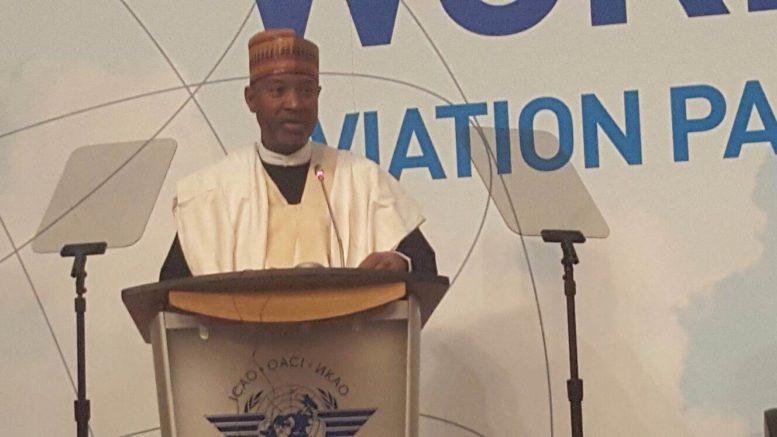 … Engages Unions, Urge Them Not To Look At Concession From That Of Bi-Courtney

…Says No To Concession, As Dialogues Continues

Minister of State, Aviation, Senator Hadi Sirika has declared that the Federal Government would not sit down and allow people to lose their jobs or sit and kill businesses in the aviation industry all in the name of concessioning the airports.

This is just as he appealed to the unions not to use the concession agreement entered between Bi-Courtney Aviation Services Limited (BASL) and the Federal Government to judge the planned concession of four major airports.

In his word, “Don’t look at concession from what we have in Bi-Courtney. Believe you me what you heard here from me about concession is the plain truth. Or if there is any other way you think we can find that quantum of money to turn around our airports, please let us know, we would be ready to listen to you.”

Sirika’s declaration is coming on the heels of the fears by the workers through the aviation unions that their members in the Federal Airports Authority of Nigeria (FAAN) in the event the Federal Government goes ahead to concession the four major airports would lose their jobs.

He spoke in Lagos at the weekend when he met with two aviation unions ;Air Transport Services Senior Staff Association of Nigeria(FAAN) represented by its  National President, Comrade Benjamin Okewu and the National Union Air Transport Employees(NUATE) represented by its former General Secretary, Comrade Abdulkareem Motajo on the concession of airports ,which the unions have opposed.

He explained that contrary to believe that workers would be laid off; he said that when these airports are concessioned there would be more activities.

The Federal Government, he stated would not sit down and watch people who voted for change to lose their jobs or kill businesses instead of creating, stressing that the aim of the concession is not to sell its assets.

”You see government has no plans whatsoever to sell national assets but it was sheer misconception. But the truth is that government does not have money to invest and even if they could, with the sheer bureaucracy it could take 10  years and Nigerians are tired of what is on ground and want something new.” Sirika said

“There is no way we would seat down as government and allow people to lose their jobs or sit down and kill businesses” he added. He reiterated that he has  26 things which he hoped to achieve during his tenure as the minister, adding that some of them are concession of airports, establishing a leasing company and setting up private sector driven MRO and national carrier.

He said that as a country the position of the government is that the planned concession of airports should be better than Singapore and Britain, adding that government would carry aviation unions along and make the process transparent.

According to Sirika, “Concession will be done transparently and will never be in camera and everybody will be carried along.”

To further prove that the proposed concession will be transparent, the minister disclosed that a Project Delivery Team has been constituted and that the unions should send representative to be in the team

FAAN, he pointed out would continue to own the airport, stressing that the concession is just for a period of time.

“I will always tell you the truth. Except I don’t understand the truth. That is why I have the unions here to tell me the truth. FAAN will continue to own airports and when airports are concessioned, there will be a lot of activities at the airport and FAAN will do more work.” He said

He continued, “It is either we have good airports by concessioning them or rely on the Federal Government to give us good airports, which it will never do. Let us tell ourselves the truth, the air conditioners are not working, toilets are not working, the same terminal we have in 1979 is still there and government does not have the money to put the infrastructure at these airports, 22 airports with 2 General Managers at Level 17 each?. ”It was extremely important and the vision of the government that we should involve and engage all the stakeholders and all the people who have a stake in what we are doing especially on the concessioning of our airports, creation of a national carrier, aviation leasing company, MRO and all of the things we intend to do through private sector driven model of doing business. We thought it in our wisdom to begin to talk to all stakeholders to get their buy in to begin to understanding of what we mean and try to define a difference between concession and privatization. “

Speaking earlier, the President of ATSSSAN, Benjamin Okewu told the minister that the plan to concession the four major airports are not acceptable to the workers, adding that FAAN workers are saying no to concession.

He hinted that the union leaders were not carried along and that as a result they were not convinced that the planned concession will not threaten  workers jobs.

Okewu assured that minister that the unions were ready to present their positions on the issue and that as it is today they do not know the shape the concession will take.

To buttress his point, the ATSSSAN boss reminded the minister that all the concession agreements entered into by the Federal Government in the aviation industry have issues and that as result the unions would not want a repeat of the mistakes done in the past.

He cited the case of the terminal concession to Bi-Courtney Aviation Service Limited (BASL), which according to him is still being disputed till today.

Okewu also cited that of Maevis Nigeria Limited, which according to him was later terminated, adding that with all these still fresh in the minds of the workers, they are bound to entertain some fears.

According to him, “It is a very serious issue. We believe strongly that we can work together in the interest of the workers and the aviation industry”

Okewu also told the Minister that the unions will have to meet to decide  whether to be part of Project Delivery Committee which the Minister has requested the unions to join.

The Project Steering Committee  will provide the general direction, and steer the course of Public Private Partnership(PPP) project concessions in the aviation sector.

While the Project Delivery Committee is charged with the responsibility  of  diligently and patriotically implementation  the decisions and policy guidelines as approved by the Steering Committee, as their success or failure would determine the fate of the whole process.

Some of the committee terms of reference includes :  approval of technical, financial and legal framework for the successful preparation and execution of the  provision of policy guidelines and general direction on all matters relating to PPP and concession of projects and programmes in the aviation sector,  consider and facilitate necessary permits, clearances and carrying relevant stakeholders along in the processing of PPP / Concession matters, approve action plans, budgets and financial requests submitted by the Project Delivery Committee, and serve as the final decision-making body on PPP / Concession matters on air transport generally.