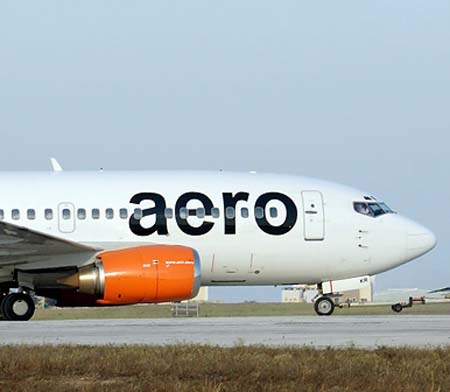 …Stakeholders  Agree To Continue To Dialogue

…As Unions Accuse AMCON Of Insincerity

The Minister of Aviation,State, Senator Hadi Sirika has stated that an inter-Ministerial Committee would be constituted to resolve the lingering crisis in Aero Contractors, the oldest airline in the country.

This  is just as he stated that Aero Contractor like the popular noodle ;Indomie Noodles is a brand ,which the Federal Government would not allow to die.

He disclosed this during a meeting with the two  aviation unions; the Air Transport Services Senior Staff Association of Nigeria(ATSSSAN) represented by the  National President,Comrade Benjamin Okewu and National Union of Air Transport Employees(NUATE) represented by its former General Secretary , Comrade Abdulkareem Motajo in Lagos at the weekend.

He  said that as the minister in charge of aviation, he has the responsibility to intervene and ensure one of the foremost airline brand in the aviation sector does not die and that in trying to resolve the issues, all the parties must be sincere, passionate and that whatever they have to say should  be in  the interest of the workers and the aviation industry.

Sirika listed the ministries that would constitute the committee to include: the Ministry of Aviation which is the host, Ministry of Justice, Finance, Labour and Productivity.

Others are: Asset Management Corporation of Nigeria(AMCON) the Central Bank of Nigeria(CBN), the Economic and Financial Crime Commission(EFCC), the Unions and workers of the embattled airlines .

He pointed out that  he would need the approve of the President Muhammadu Buhari to set up this  committee and that the  essence of the Inter –Ministerial Committee is not only to  get  to the root of the problems of the airline but also to know who is not sincere between the workers represented by the unions and AMCON .

The minister said that industry has a very serious problem on its hand which it must resolve, adding that the government would not fold its hands and allow Aero Contractor to die , considering the fact that the airline is a brand .

He added that in the interim, he would appeal to the management to re- open Aero offices and allow workers to go back to work and that the unions should guarantee that while this is done , the workers on their part should not exhibit anything attitude that would give the management to feel unsafe while carrying out its work

According to him, “We have a very serious problem in our hands. It needs participation, understanding ,sincerity,and looking beyond the minister . We have a fantastic brand in Aero . That brand is slowly being destroyed. That brand is about to be extinct  and except we join hands and do something together we may not be able to resolve the issue. The issue is not about you and I but about our children, who will inherit this from us . The premier organisation in  the Nigeria aviation industry  Nigeria is about to die  and we have a responsibility not to allow this to happen.With  this background I set out to intervene in Aero crisis”

He continued, “Many people blame Aero but I don’t think so.Aero’s problems  did not start with AMCON coming in . It started way back. The world is watching  what we are going to do ,the President is concerned .So are the unions and the workers. How do we return the brand to the air and not kill it? How do we revive Aero ,retain all the workers and ensure that it continues to operate?. There is no how we would sit down as government and allow people to lose their jobs or sit down and kill businesses. There is no difference between Indomie and Aero Contractor. They are both brands. We have to collectively proffer solution to Aero’s problems.Let us change Aero’s story and do something that will make  Aero fly”

Sirika advised the gathering that while trying to resolve the crisis in Aero , stakeholders should not be driven by external forces  and that there should be honesty in whatever solution stakeholders are proffering, as according to him God and posterity will judge us if we fail to tackle this crisis honestly  and sincerely.

He disclosed that AMCON has 12,000 companies under its watch  with debts of about N5 trillion and that Aero , which is one of them owe some billions of Naira.

Earlier, Comrade Motajo told the Minister that AMCON was not telling the truth about the situation in the airline,adding that the unions tracked AMCON to the  Ministry of Labour and Productivity  to look into the issues raised by the unions as a third party  but that it was  AMCON that has refused to do the right thing.

Motajo argued that to resolve the crisis in Aero AMCON must be ready to do the right, adding that it is the insincerity of the organisation that has prolonged the matter.

He continued, “We want a round table discussion with CBN,Ministry of Finance ,AMCON,workers, unions and legacy companies.”

Speaking in the same vein , the Okewu stated that the unions never expected the resolution of the crisis in Aero to be an easy task but that the unions believed that if all the stakeholders are committed they can bring the airline back.

He lamented that none of the 12,000 entities under AMCON have successful stories to tell , adding that when AMCON took over the banks, it told the workers to go home and that it is the same strategy that it wants to apply in Aero.

He said that the procedures and processes of sending workers home were not followed  by AMCON.

According to him, “ We consulted the Ministry of Labour and Productivity on Aero crisis and that the Ministry even put a Caveat that if any party has problem while trying to resolve the crisis , it should consult the Ministry but AMCON never did that instead it sent the workers home.”

He told the the Minister of State , Aviation that AMCON brought forensic experts to look at  Aero’s books but that at the end of the investigation AMCON did not make the findings public.

In his words,” AMCON brought forensic experts to look at Aero’s books but till date AMCON has refused to make the findings by these experts public.We have  looked at Aero’s books and we have seen what is wrong . What we have been suggesting to AMCON for Aero to survive is not going down well with AMCON.