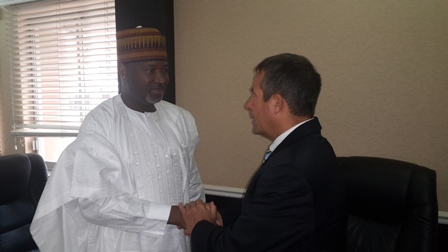 * From Left: Minister of State for Aviation, Senator Hadi Sirika in a warm handshake with the United Nations-Appointed Project Manager for the schools, Douglas Melvin in his office in Abuja.

The decision by the world body to set up AVSEC training institutions in the country will boost the Federal Government’s vision and efforts towards turning around the aviation sector to meet global standards in infrastructure, safety and security.

An online statement signed by the Deputy Director, Press & Public Affairs, Mr. James Odaudu explained that the main objective of the project is to support the nation’s overall counter-terrorism strategy by providing a key element of a robust national aviation security policy that mitigates effectively the threat posed to civil aviation by terrorist organizations and their operatives

Briefing the Minister of State for Aviation, Senator Hadi Sirika in his office, the United Nations-appointed Project Manager for the schools, Douglas Melvin, said that the initiative will also enhance the capacity within the United Nations system to help interested Member States to implement the United Nations Global Counter-Terrorism Strategy in an integrated manner.

Explaining further, he said that this involves assisting the partnering Member States with their implementation of the strategy across all four topical pillars, which address the multiple dimensions of countering terrorism and utilising assistance capacities and efforts from across the United Nations system.

According to him, the choice of Nigeria, out of the 25 countries considered, was in appreciation of its clear and well documented roadmap on developing the aviation sector, with particular emphasis on safety and security.

He said the country stands to reap more benefits than the training of its aviation security personnel by the best available security experts.

He listed other benefits to include the provision of and exposure to hi-tech Aviation Security equipment and the generation of revenue from training of aviation security personnel from other countries.

The UN Project Manager also informed the Minister that the up-coming United Nations General Assembly will make a proclamation on Aviation Security (AVSEC) with specific reference to Nigeria and that this underscores the importance attached to the project as a flagship and high profile one which the country is privileged to be a beneficiary.

Sirika, expressed Federal Government  gratitude to the United Nations for recognising and identifying with the government visions and efforts to establish and nurture a world class aviation industry in Nigeria that is basically founded on Safety and Security,.

The Minister assured the United Nations’ of government readiness to provide all that is necessary for effective take-off and operation of the two institutes to be located in Abuja and Lagos.

Sirika said the decision of government to establish a Ministerial Committee on Airport Security on assumption of office, defined the importance it attached to AVSEC as a critical component of the overall national and international security system.

Sirika also described the choice of Nigeria as an Aviation Security training centre by the United Nations body as a massive boost to the nation’s desire to become a regional aviation hub and also heighten investor confidence in the country.

The project is to be fully funded by the United Nations and delivered by the United Kingdom Department of Transportation while Nigeria is expected to participate in the provision of training premises and supply of low-cost aviation training equipment, amongst others.