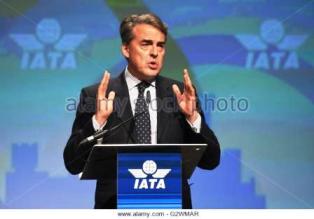 Measured in Freight Tonne Kilometers (FTKs), demand increased by 5.0 per cent in July 2016, compared to July 2015.

According to IATA this was the fastest pace in almost 18 months, adding that freight capacity measured in available freight tonne kilometers (AFTKs) increased by 5.2 per cent year-on-year, outstripping demand and keeping yields under pressure.

It stated that despite the subdued global trade backdrop, carriers in the world’s four biggest air cargo markets; Asia-Pacific, Europe, North America and the Middle East reported an increase in freight demand.

The international Airline body disclosed that the strongest growth occurred in Europe and the Middle East, with July demand up by 7.2 per cent  and 6.7 per cent respectively, compared to the same period last year.

According to IATA’s Director General and Chief Executive Officer, Alexandre de Juniac, “July was a positive month for air freight,which is an all too rare occurrence. Despite that, we must recognize that we face some strong headwinds on fundamental aspects of the business. Global trade growth is sluggish and business confidence is weak. And the political rhetoric on both sides of the Atlantic is not encouraging for further trade liberalization.”

According to Alexandre de Juniac Asia-Pacific airlines reported a 4.9 per cent increase in demand for air cargo in July compared to last year.

He said that in particular, growth has been driven by strong increases in the large ‘within Asia’ market in recent months, but the latest business surveys from the region paint a mixed picture. Capacity in the region expanded 2.7 per cent.

North American carriers saw freight volumes expand 4.1 per cent in July 2016 compared to the same period last year, and capacity increase by 3.4 per cent. International freight volumes (which grew 1.3 percent in July) continue to suffer from the strength of the US dollar which has kept the US export market under pressure.

European airlines posted the largest increase in freight demand of all regions in July, 7.2 per cent year-on-year. Capacity increased 3.8 per cent.

The positive European performance corresponds with an increase in export orders in Germany over the last few months.

Europe’s freight volumes have now surpassed the level reached during the air freight rebound following the Global Financial Crisis. The only other region to achieve this is the Middle East.

The region’s growth rate, while still strong, has eased to half the 14 per cent recorded annually between 2012 and 2015 and that this is mainly attributable to slower freight growth between the Middle East and Asia.

Latin American airlines saw demand contract by 5.6 per cent in July 2016 compared to the same period last year and capacity increase by 10.1 per cent.

The region continues to be blighted by weak economic and political conditions, particularly in the region’s largest economy, Brazil.

African carriers, IATA said recorded a 6.8 per cent decrease in year-on-year freight demand in July 2016; the largest decline in seven years and that airlines’ capacity surged by 31.3 per cent on the back of long-haul expansion.