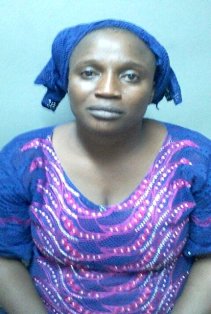 She was immediately placed under observation by officials of NDLEA.

According to the NDLEA the suspect has so far excreted  76 pellets of substances found to be cocaine.

In the vein, the anti –narcotic agency at the international wing of the Murtala Muhammed Airport (MMA), Lagos, also intercepted a 37 year old father of three children for inserting seven wraps of cocaine weighing 355 grammes inside his anus.

Both suspects were going to Saudi and China where drug trafficking is punishable by death.

NDLEA Commander at the Abuja airport, Hamisu Lawan, said that the female suspect is still under observation until she expels all the ingested pellets of drugs.

“Mrs Binuyo was arrested during the outward screening of passengers on an Emirate flight to Medina through Dubai. She has so far excreted seventy-six (76) pellets of drugs that tested positive for cocaine. Meanwhile, she is still under observation until the drugs are completely expelled” Hamisu stated.

She is married with three children and a trader at dosumu market, Lagos. In her statement, she agreed to smuggling the drugs for a fee.

“I am a trader in Lagos, married with three children. I wanted to expand my cosmetic business but I have no money. My sponsor offered to foot my expenses to Saudi on pilgrimage. I was excited until I was asked to take drugs along. I wanted to decline but considering the offer of a million naira, I accepted. I swallowed the drugs in Lagos and took flight to Abuja on my way to Medina but I was caught in the process” she stated.

The other suspect was found to have inserted seven wraps of cocaine weighing 355 grammes inside his anus at the international wing of the Murtala Muhammed Airport (MMIA) Lagos. He was apprehended during outward screening of passengers on an Ethiopian Airline flight to Hong Kong, China through Addis Ababa.

NDLEA Commander at the airport, Ahmadu Garba, said that the suspect, who hails from Imo State holds a dual citizenship of Nigeria and Mali.

“An arrest has been made of a suspect travelling to Hong Kong, China. He hails from Imo State but was travelling with a Malian international passport. The name on his passport is Diara Sauduo while his Nigerian name is Okpalanem Henry. The case is under investigation,” the commander stated.

The suspect who expelled seven wraps of cocaine on his way to China where drug trafficking is punishable by death did not show any form of remorse.

In his words, “I know that there is capital punishment for Drug trafficking in China but I was optimistic of safe passage. Unfortunately, I was caught with only seven wraps. Maybe that is my destiny. I am married with three children”.

Chief Executive of the Agency, Col. Muhammad Mustapha Abdallah (rtd) expressed satisfaction with the arrest stating that it is a product of diligence and vigilance.

“The arrest of the suspects is commendable. We will continue to be on the alert in protecting all exit and entry points from drug trafficking organisations. I am glad that the suspects were arrested here thus preventing them from untimely death and also protecting the image of our country from disrepute” he stated.

The NDLEA boss urged members of the public to join in the anti-narcotics campaign and avoid drug trafficking and other activities capable of undermining their good name and strong moral principles.