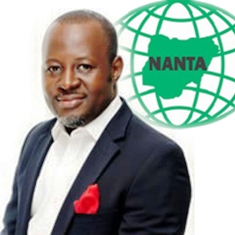 The National President of the National Association of Nigeria Travel Agencies (NANTA), Mr Bernard Bankole, has called on the Federal Government to declare a state of emergency in the aviation industry in view of the crisis rocking the sector.

His call is coming on the heels of the crisis in the aviation sector, which has led to two airlines; Aero Contractors, the oldest airline in the country and Firstnation Airways suspending operations in quick succession.

Bernard, who made the call at a breakfast meeting with select journalists in Lagos today, added that if airlines continue to suspend operations, there will be no jobs for NANTA members to do.

Recalled that Aero Contractor had on September 1, 2016 commenced the suspension of scheduled operations and also sent about 1,400 workers on indefinite leave without paying them the three months salaries owed them and other entitlements due to them.

The management of Aero Contractor had stated the development was part of the strategic business realignment to reposition the airline and return it to the part of profitability.

Firstnation on the other hand had suspended its operations because it was currently undergoing maintenance on A319 fleet and that this maintenance exercise will be completed on or before September 15, 2016.

Speaking further, the NANTA boss lamented that the crisis in the aviation sector which has led to two airlines suspending operations is tragedy, adding that government must wait for it to happen to other airlines before declaring a state of emergency in the industry.

According to him, “What is happening in the aviation industry is an eye sore and alarming. It calls for a state of emergency in the aviation industry. We don’t have to let the industry collapse we do that .The industry is nose diving every day .Aero Contractor suspended operations and while Nigerians were still talking about Aero Contractors, Firstnation also suspended its operation. The Federal Government must take action immediately”

Bernard posited that with the suspension of flights by Aero, the pressures of carrying passengers from point to the other would now rest on other domestic airlines in the country, who according to him are equally facing serious challenges considering the unfriendly environment which they operate.

He warned that if the Federal Government fails to look into the crisis and allow it to continue to ravage  airlines particularly and the aviation industry in general, Nigerians may be forced to resort to road transport.

The NANTA Chief Executive Officer posited that while  countries in other climes are moving their aviation industries forward with the airlines expanding into bigger entities, Nigerian  aviation industry is nose diving with  domestic airlines suspending operations one after the other while others are struggling to survive.

He stated that while shopping malls and super markets were springing up at airports around the world, kiosks are all over the place at Nigerian airports, wondering if the managers of Nigerian airport are in touch with modern trend aviation.

On creating conducive environment for aviation to thrive, Bernard stated that Ghana had cashed on Nigeria’s poor foresight and inefficiency by reducing the cost of aviation fuel also known as Jet—A1 by 20 per cent and with the plan to make Accra a hub in West Africa.

Foreign airlines, he said are planning to fly from Ghana to pick passengers in Nigeria and do whatever they want to do in Ghana.

These airlines, he pointed out prefer Ghana because they are comfortable with the favourable working environment provided by the Ghanian authorities.

In his words, “These are the reasons why state of emergency must be declared in the Nigerian aviation industry.”

He lamented that today air passengers  find it difficult travelling by air from  Lagos to Port Harcourt  due to the inability of domestic airlines in the country to render services, adding that NANTA met with the Nigerian Civil Aviation Authority (NCAA) and urged the regulatory body to intervene.

“We had a meeting with NCAA and we have asked them to look into these issues to save the industry from collapse,” he said.