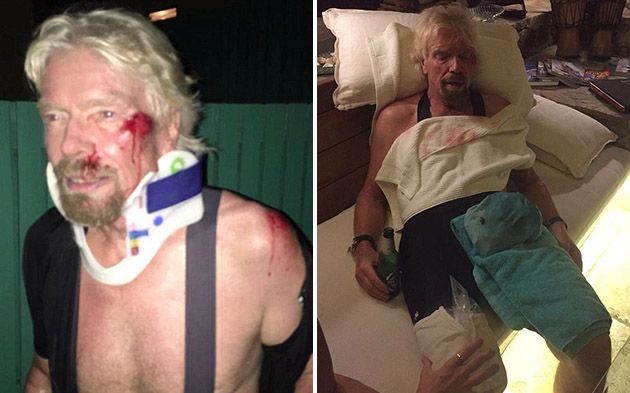 * A bloodied Richard Branson after the crash (Virgin)

Branson was training for a charity event (Virgin), when the accident happened

Sir Richard Branson said he thought he was ‘going to die’ when he was involved in a horror bike crash.

The 66-year-old was left with a cracked cheek, torn ligaments and big cuts to his face after falling from his bike in the British Virgin Islands.

He said his life was saved because he was wearing a helmet.

The accident came on the fifth anniversary of the blaze at his home on his luxury Caribbean Neckar island, which caught fire after being struck by lightning. Branson was rushed to hospital in Miami after the bike accident, which happened when he was training with his children Holly and Sam for a fundraising challenge next month.

The billionaire was rushed to a Florida hospital (Virgin)

“I really thought I was going to die. I went flying head-first towards the concrete road,” said Branson.

He continued, “But fortunately my shoulder and cheek took the brunt of the impact, and I was wearing a helmet that saved my life. .My bike went flying off the cliff and disappeared. We’ve since recovered the crumpled bicycle, completely destroyed. My cheek has been badly damaged and my knee, chin, shoulder and body severely cut.”