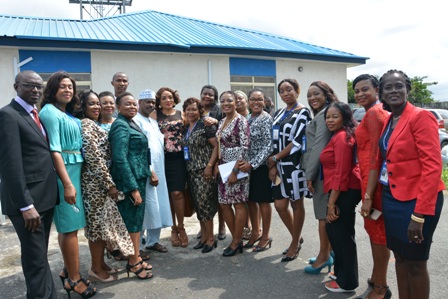 Some Cabin Crew Members In a Group Photograph at the Cabin Safety Workshop at NCAA Annex, international wing of the Murtala Muhammed Airport (MMA), Lagos.

…As Stakeholders Advocate For Psychometric Test For Crew

This is just as he said that crew members in any flight are a team and that no one is inferior to the other.

The Director General, who was represented by NCAA Director of Operations, Capt. Abdullahi Sidi said that the Cabin Safety Inspectorate is always proactive and has decided to engage Cock-Pit –Cabin interaction in the workshop theme.

Sidi added that he is very sure that today’s discussions and interactions would trigger healthier though professional mutually beneficial aviation relationships as the cabin crew depends on one another for effective flight safety.

The representative of the DG noted that all the crew members in any flight are equal and that no one is superior to the other.

According to him, “All spheres of human endeavour require relationships and good relationships make us healthy and strong .The crew members are a team and no one is inferior to the other.”

In her welcome address, the Assistant General Manager, Cabin Crew, NCAA, Ordon Maria Ubong, informed that the essence of the workshop is to make cabin crew open up on what happens in the course of doing their job and also share experiences as it concerns the relationship between the cockpit crew and the cabin crew.

Other aims of organising the workshop, according to Ordon includes: to bring cabin crew operating up to date on regulations Standards and Recommended Practices(SARP),create an ambiance, where the regulator and the regulated could mingle and to foster an interaction in a virile social milieu.

She added that their duties are very crucial to flight safety

She said that there should be a good relationship between cockpit crew and cabin crew, adding that if cordial relationship is not there, the flight may have problem

On his part, the Chie Pilot of Aero, Capt Gerald Moka, posited that what is causing the problem   between cockpit and cabin crew is the lack of communication between the cockpit and the cabin crew.

He stated that while the job of the cockpit crew is technical in nature that of the cabin crew is more of social as they attend to passengers and make them comfortable but that despite the differences in their jobs, the main purpose of the flight is to ensure that passengers get to their destinations safely.

Speaking at the event, the former Pilot with Bristow Helicopters, Capt Dung Pam has called for introduction of psychometric test for both cockpit and cabin crew to detect individual mental ability, adding that this will go a long way to reduce the friction between the two parties.

He added that airlines can use the information collected from the psychometric test to identify the hidden aspects of either cabin crew  or cockpit crew  that are difficult to know looking at the person’s face.

They are designed to measure candidates’ suitability for a role based on the required personality characteristics and aptitude. They help identify the extent to which candidates’ personality and cognitive abilities match those required to perform the role.

Pam stated that Nigerian aviation should go beyond punitive reporting but instead advocated for Whistle Blower Policy, where somebody who blows a whistle about an incident or an issue is protected.

He stated that despite the not too rosy relationship between cabin crew and cockpit crew, the ultimate goal is to achieve flight safety.

Cabin crew are members of a flight employed by airlines to ensure the safety and comfort of passengers of commercial flights.

The duty of the cabin crew is to provide excellent customer service to passengers while ensuring their comfort and safety throughout the duration of the flight. They are also trained to deal with security and emergency situation.