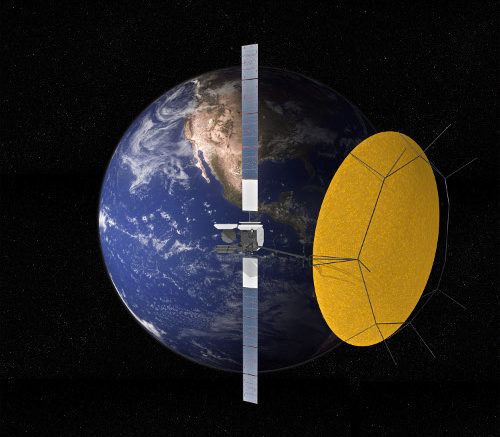 * An artist rendering of one of the Mexsat satellites built by Boeing, part of the overall Mexsat system Boeing designed, integrated and delivered to the government of Mexico. (Boeing image)

Boeing has delivered one of the world’s most advanced satellite communications systems to Mexico, one that opens high-speed data and voice communications to the entire country including some previously unserved areas.

After successfully completing its final tests, the Mexsat system was today formally accepted by the Ministry of Communications and Transportation.

The system is operated by Telecommunications de Mexico (Telecomm) on behalf of the government.

“With more than 30 years’ experience building satellites for Mexico, Mexsat enhances an already strong relationship with an important customer ”he said.

According to the aircraft manufacturing giant ,the final field tests were completed within 10 months following the launch of the Morelos-3 satellite and that the tests involved exercising the 3G+ services such as voice calls, push-to-talk, internet video sessions, asset tracking, voice mail and text messaging over secure links to prototype terminals on ships, planes, vehicles, handheld devices and fixed sites.”

It further stated that this year (2016) Boeing celebrated 100 years of pioneering aviation accomplishments and launches its second century as an innovative, customer-focused aerospace technology and capabilities provider, community partner and preferred employer.

Through its Defense, Space and Security unit, Boeing is a global leader in this marketplace and is the world’s largest and most versatile manufacturer of military aircraft.

Headquartered in St. Louis, Defense, Space and Security is a $30 billion business with about 50,000 employees worldwide.