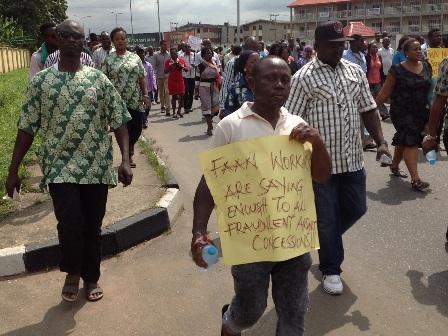 Traffic grid lock was the order of the day at the Murtala Muhammed Airport (MMA),Lagos and all the roads linking the airport following the peaceful protest organised by aviation unions against the planned concessioning of four major airports in the country .

At the Ikeja end of the road movement of vehicles was at snail speed, the same thing at the NAHCo end of the road, while Policemen from the Domestic Police Station of the Airport Police were seen controlling traffic to ensure free flow of traffic.

Abelnews observed that while many of the protesting workers were seen singing and trekking from the Freedom Square to the General Aviation Terminal also known as Terminal 1 and to the international terminal, other workers  who could not trek were seen at the back of the Federal Airports Authority (FAAN)tractor  also singing solidarity songs. Abelnews learnt from the unions that the  peaceful protest will be taking place simultaneously at Nnamdi Azikwe Airport(NAA),Abuja, Port Harcourt Airport and Mallam Aminu Kano Airport.

Today in Lagos the gates leading to FAAN offices were shut to ensure that workers comply with the directive of the union.

Some of the workers who would not have participated in the protest were seen trekking along with the union members, a situation that further confirmed that the gates to their offices were locked by the unions.

Jointly speaking at the Freedom Square, where the workers assembled for the protest, the Acting General Secretary, Comrade Olayinka Abioye and General Secretary, ATSSSAN, Francis Akinjole ,said that that the workers will resist any attempt by the government to concession the four major, adding that the unions are aware that some  cartel  are already coming forward to ‘buy’ these viable airports.

They argued that that the unions cannot mortgage the destiny of over 6,000 workers of FAAN into selfish hands of few political cartel or individual concessionaire stay clear of this unacceptable deal.

They further contended that the uncontrolled employment and improper placement of certain category of staff without recourse to the Federal Character and Public Service Rule is a ploy to render FAAN insolvent for them to acquire.

The protest is coming few days after the Minister of State, Aviation, Senator Hadi Sirika assured Nigerians that their interest would not be jeopardised in the resolve to concession some of the nation’s airports.

He told Nigerians that the decision to concession the airports borne out of its desire for effective and efficient management of the airports and adequate utilization of the abundant skilled manpower in the Aviation sector.

He said this when the Management of the Infrastructure Concession Regulatory Commission led by its Director-General, Aminu Diko visited his office to present the ‘Commission’s Framework for Addressing the Development of Public, Private Partnership Projects in Aviation Sector’.

According to him, ‘’the best way to go is the Public Private, Partnership and so, we are going that way’’

Concessioning of the airports, he stated would make the system go faster as what will take the sector a long time to do, owing to the paucity of funds in government, will be made easier by the partnerships to be entered into.